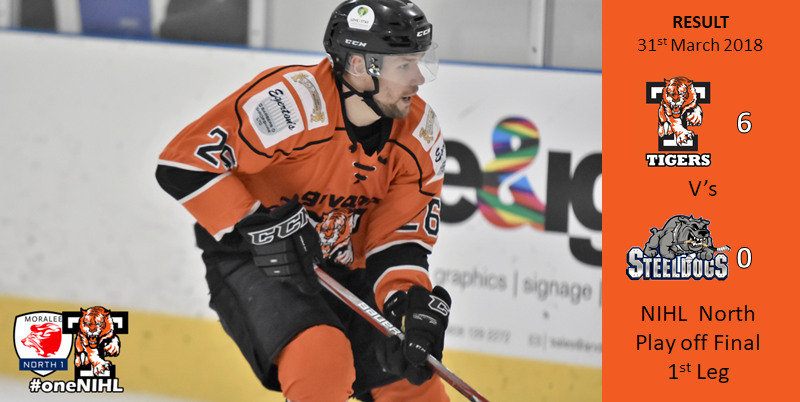 Telford Tigers 1 faced off against league champions Sheffield Steeldogs in the 1st leg of the NIHL North play off final at Telford Ice Rink on Saturday night. Tigers had qualified for the final after beating Hull Pirates in a breathless encounter that went all the way to overtime in the 2nd leg, with Jonathan Weaver scoring a magnificent winning goal to settle the contest.

Tigers announced the return from retirement of Joe Miller for the playoff series against Sheffield and the NIHL playoff weekend in Coventry. Tigers were without Dale White and Nick Oliver but were able to add U18 players Dan Mitchell, Louis Morgan, Brodie Jesson and Jed Moreland to the line up.

Tigers started the game on the front foot from the puck drop. Adam Taylor’s speedy break saw his wrist shot hit the crossbar and was followed by Ricky Plant and Jason Silverthorn going close. Tigers took the lead in the 9th minute when Adam Jones’ shot took a double deflection off Silverthorn and then Plant before going into the top right hand corner of the goal past the unsighted Sheffield net minder Dimitri Zimozdra. Silverthorn then hit the cross bar with a wrist shot.  As the period reached the final two minutes, Sheffield’s Adrian Palak took a hooking penalty and Tigers took full advantage. Miller made a fantastic toe drag to keep the puck away from Sheffield’s defence and threaded a pass to the far post for Warren Tait to tap home giving Tigers a deserved two goal lead at the break.

Sheffield started the 2nd period much better and ex Tigers’ player Milan Kolena hit a powerful shot off the cross bar in the opening minute, but Tigers broke straight after with Weaver finding Macaulay Halford who passed to Scott McKenzie to fire into the net for the 3rd goal.  Tigers continued to dominate and added a 4th goal when Plant sent a superb pass to Silverthorn who broke away down the middle of the ice, out paced the Sheffield defence, and hit a perfect shot into the roof of the net.  Tigers then hit the post again, this time it was from Weaver’s long range shot. Tigers ended the period with a 5th goal, Miller hit a shot from a tight angle and McKenzie slotted the rebound into the net.

At the start of the 3rd period, Sheffield changed net minder, with Brandon Stones replacing Zimozdra.  Tigers continued to fire plenty of shots on the net and were rewarded with a 6th goal when Filip Supa scored with a wrap around goal which was banked off Stones into the goal.

Tigers net minder Denis Bell was called into action a number of times including one sensational save from a Sheffield break away, Bell managing to save the puck after a full length dive across his goal to ensure that he gained his 9th shut out of the season. Tigers would take a huge advantage into to the 2nd leg in Sheffield on Sunday night.

After the game coach Tom Watkins said, “It was a dominant performance this evening for the full 60 minutes. I really liked the tempo and intensity we played with. All the guys bought in to a simple plan and we managed to keep them on their heels all night. There were some outstanding individual performances which paved the way for an excellent team performance and result.

Every line contributed offensively which, as a coach, is very pleasing as it’s hard to play against a team who have that spread offensively.”