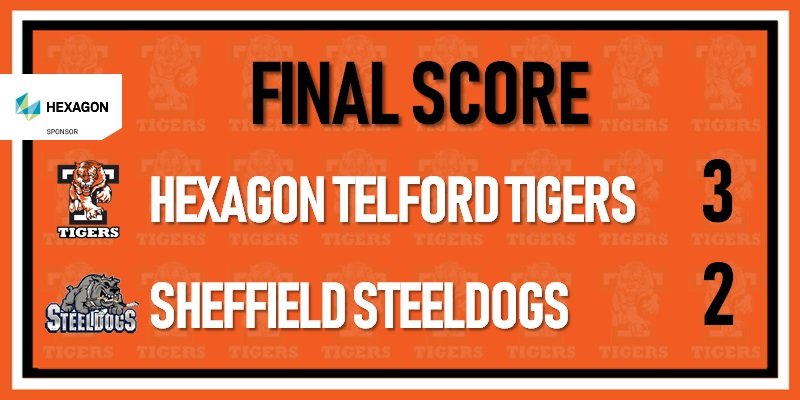 Tigers Steel Narrow First Leg Lead. Hexagon Telford Tigers 1 played against Sheffield Steeldogs in the Northern Playoffs semi-final first leg on Saturday night at Telford Ice Rink. Tigers had qualified for the semi finals with a victory over local rivals Solihull Barons and faced off against the team that had beaten them in the Northern Cup Final earlier in the season. The loser of the tie would see their season end and the winner going on to compete in the final of the Northern playoffs against Hull Pirates or Whitley Warriors. The added bonus of winning the tie is a place in the NIHL Final Four in Coventry in two weeks time.

Tigers had a full roster of players available with the exception of the injured Denis Bell. Coach Tom Watkins took the opportunity to ice a number of the U18 players who had played a game at the rink prior to the Sheffield game. Alex Blake, Fin Howells, Henry Adams, Dan Mitchell and back up net minder Ryan Lewis were all on the roster. Starting in goal for Telford was Tom Hovell and Dimitri Zimozdra for Sheffield.

A fast paced first period saw only one goal but lots of end to end play and numerous penalties. Referee Brooks appeared to miss a blatant boarding on Andy McKinney but shortly after called Brodie Jesson for a cross check, much to the fans’ displeasure.  Tigers were next to have a power play, when Milan Kolena was called for tripping. Tigers took full advantage of the extra player, when Ricky Plant found Jason Silverthorn in the slot. The Tigers’ captain hit a wrist shot between the legs of Zimozdra into the net for the opening goal of the contest. Both teams suffered further penalties with Thomas Barry for Sheffield and Silverthorn being sent to the penalty bin but neither side could add to the scoreboard, leaving Tigers with a narrow lead at the end of the period.

Tigers started the second period in perfect fashion with a second goal. Jonathan Weaver’s precise pass sent McKinney clear on goal. McKinney hammered an unstoppable shot into the top corner of the net to give Tigers a 2-0 lead. Adam Taylor then went close but Zimozdra denied him. Sheffield’s Barry then cleared Watkins’ shot off the line after the puck had got past Zimozdra but not into the goal. Referee Brooks continued to draw the ire of the home crowd as he refused to call a penalty on Sheffield’s Tim Smith after a late hit that left Joe Aston down on the ice for some time. Brooks did call a penalty shortly after on Sheffield’s Ashley Calvert for high sticking. Tigers scored their second power play goal of the night and third goal when Adam Taylor’s shot rebounded off Zimozdra’s pads and Jack Watkins slammed home the rebound.  Sheffield spent the last few minutes of the period pushing for a goal to get back into the game. Hovell made a fine save from Kolena’s slap shot and Danny Rose made a last ditch clearance to keep Tigers’ lead in tact at the end of the second period.

Sheffield finally got on the scoreboard in the 45th minute. Ashley Calvert scored with a wrap around shot and, four minutes later, they added a second goal. Tigers’ defence failed to clear the puck and Liam Charnock scored from close range. Both teams were visibly tired as the game reached the final stages but there was one last chance for Tigers to increase their lead. Weaver’s shot was saved by Zimozdra and Silverthorn fired the rebound towards goal but the Sheffield net minder managed to get across his crease to block the follow-up shot. Tigers’ win sees them carry a narrow lead into the second leg in Sheffield.

After the game coach Tom Watkins commented, “We have a small advantage going into tomorrow but gave away two soft goals to allow them back into the game. We outworked them for two periods, stuck to our systems, managed the puck well and I felt we did everything right.”

Watkins added, “The power play came up trumps with two goals, Silvs (Silverthorn) was rewarded for his effort and a we scored a well worked goal off a rebound – similar to the one that Jack got last week. The penalty kill was solid tonight, not giving up much end zone time as we did a good job pressuring the puck on entry or up ice. Special teams are so important in these games. There is still all to play for tomorrow.”