Tigers Storm to Shoot Out Victory. 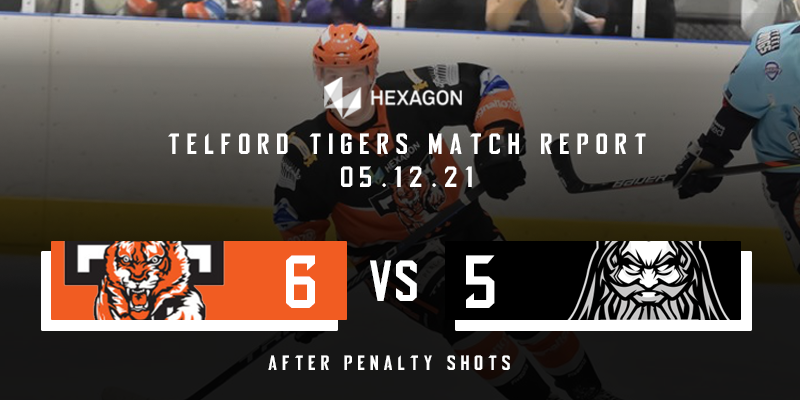 Tigers Storm to Shoot Out Victory. Hexagon Telford Tigers returned to home ice on Sunday evening after a terrific victory on the road against league leaders Swindon Wildcats. Tigers won a close contest, 3-2 in overtime, with captain Jason Silverthorn netting the winner.

Tigers continued to be without the services of Ricky Plant, Jack Watkins and Ross Connolly but were able to add new signing Vladimir Luka to the lineup to make his home debut.

The game was played at a very fast pace and there was barely a stoppage in the opening stages. Tigers took the lead in the ninth minute after a spell of good possession. Thomas McKinnon cycled the puck to Andy McKinney who shot at Lucas Smital in the Milton Keynes’ goal. Smital made a save but the puck bounced out into the slot and fell perfectly for Luka to blast home for the opening goal of the game. Tigers were indebted to Brad Day in the Tigers’ goal who made a terrific save from Sam Talbot from point-blank range. However,  as the period ended Tigers conceded a disappointing goal to undo all their previous good work in the period. Sean Norris sent a puck high out of Milton Keynes’ defensive zone that Nick Oliver misjudged, allowing Bobby Chamberlain to skate in on Day unchallenged and score with a low shot.

Tigers regained the lead early in the second period with a dominating shift from the line of Luka, McKinney and Scott McKenzie. Milton Keynes couldn’t clear the puck and Tigers cycled it well and Luka found McKenzie in front of goal. His shot was saved but McKinney was on hand to tap the rebound into the net. Shortly after, Tigers were given their first power play of the game after Milton Keynes were called for too many men on the ice.  Tigers took full advantage of the extra attacker with Luka scoring his second of the night. Danny Rose fed the puck to Luka in the right circle and the Czech forward hit a powerful shot towards goal and past Smital for Tigers’ third goal. Tigers had all the momentum and soon added a fourth goal. A terrific passing move saw Austin Mitchell-King pass to Jonathan Weaver who hit a one time pass to the unmarked Jack Hopkins who tapped the puck home from close range. Zaine McKenzie pulled a goal back for Milton Keynes but almost immediately Tigers added a fifth goal. Nick Oliver smashing home a shot from the slot that went in off the post.

Tigers headed into the third period in control of the game and for much of the period controlled the play, but sloppy play late in the game handed Milton Keynes the chance of a comeback. Leigh Jamieson pulled a goal back when a Russell Cowley shot went wide of goal and bounced off the backboards to allow Jamieson a tap in. Then a harmless shot from Sean Norris bounced off Jonathan Weaver, who was standing in front of Brad Day, and went past the Tigers’ netminder for Lightning’s fourth goal. The comeback was complete with a power-play goal from Hallden Barnes-Garner who shot low past Day after McKinney was called for interference.

With the game level, Tigers took a time out to compose themselves and managed to settle down and take the game to overtime.

During overtime, Day made a terrific save from Talbot to keep the game alive and with no goals scored, the game went to a penalty shoot-out.

The penalty shoot-out went a full 13 rounds before it was settled. Norris shot wide to allow Tigers a chance to win the game. Mitchell-King was the Tigers’ hero, scoring with a low shot past Smital. Tigers’ win gives them a four-point weekend and keeps the pressure on leaders Swindon.

Following the game Head Coach Tom Watkins, said, “A win is a win, we got the 2 points and when we look back that’s all we’ll see.  It’s good to get another 4 point weekend under our belts and take points off our close rivals, I think that’s the most important thing.

I know people will say we made hard work of that, we did, we shouldn’t give up a 3 goal lead in the last period but we also stuck to the task at hand and won the game which is the most important thing tonight.”