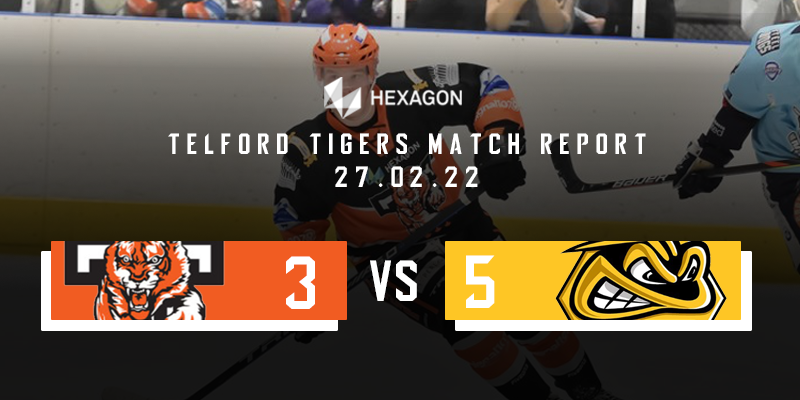 Tigers Stung at Home. Hexagon Telford Tigers returned to home ice to take on the Bees after a terrific shoot out victory over Milton Keynes Lightning the previous day. Tigers win coupled with Swindon’s shoot out loss to Leeds Knights left Telford five points clear at the top of the league.

Telford remained without the services of Sam Watkins, Jack Watkins and Ross Connolly.

The first period was a scrappy one with hardly any stoppages. Tigers struggled to get their passing game going and both teams struggled to create chances. Bayley Harewood hit the post after a good pass from Andy McKinney but the puck was cleared before Harewood could score. The only goal of the period came four minutes from the end. Vladimir Luka sent Brodie Jesson in on goal at a tight angle, Jesson’s shot hit Bees’ netminder Dan Weller-Evans on the shoulder and dropped into the net behind him.

Tigers fell apart in the second period and got out outfought and outplayed. The first Bees goal had an element of fortune about it when a backhanded shot from the blue line by William Stead was tipped past Brad Day by Zaine McKenzie to draw the sides level. With five minutes of the period left and the game getting very disjointed Tigers lost their heads and with it the game. James Galazzi scored to put Bees ahead and was closely followed by McKenzie’s second of the game with a shot that went in off the bar. Tigers then conceded another goal twenty two seconds later. Dominik Gabaj’s pass from behind the goal hit Josh Smith and deflected past Day for Bees’ fourth goal. The game got worse for Tigers as a needless interference penalty by Jake Price gifted a power play to Bees who scored easily with the man advantage, Josh Martin scoring past Day. Tigers skated off at the end of the period with their heads down and a mountain to climb.

A goal five minutes into the third period gave the Tigers hope. Scott McKenzie and Jack Hopkins combined to set up McKinney who shot in off the bar. A further goal was scored when Joe Aston sent a cross-ice pass to Jesson who hit a wrist shot past Weller-Evans for the Tigers’ third goal. But any hopes of a comeback were dashed by two late penalties for the Tigers. Jesson was called for interference and was followed into the penalty box by McKinney, meaning Bees could play out the remainder of the game whilst Tigers were short-handed and unable to attack.

A disappointing performance was tempered by news of Swindon’s second defeat of the weekend to Leeds meaning the lead at the top was still five points despite the Tigers’ defeat to Bees.

After the game Head Coach Tom Watkins, commented, “It was a very disappointing performance, we didn’t get going at all and didn’t deserve the points tonight. One team are playing for a playoff place and one team playing for first place but only one team showed the spirit, desire and determination required at this stage of the season. Every game means something right now and to be outworked by a team who have played three games in three days with their three lines outworking our four lines is not acceptable.  They made us battle in the trenches and even in situations where we had the numerical advantages along the walls they still came up with pucks they had no right to. Credit to Doug Sheppard and the Bees tonight they fully deserved the win and played with way more heart.”