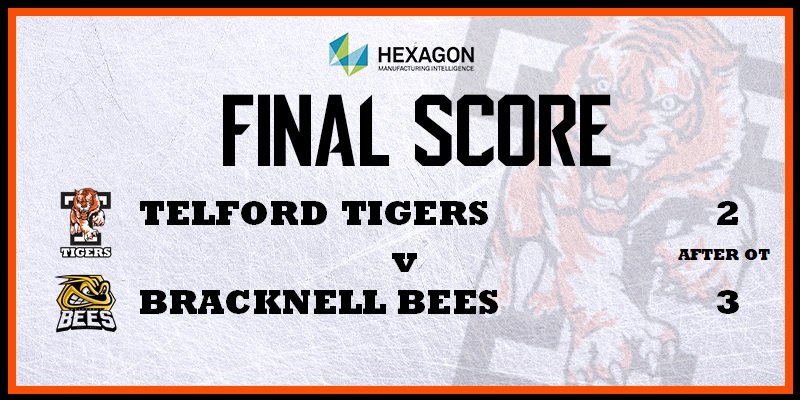 Tigers Stung in Overtime Loss. Hexagon Telford Tigers played the second of back to back games against Bracknell Bees on Sunday night at Telford Ice Rink. Tigers lost to the Bees the previous evening 5-3 after a disappointing performance saw the team slump to a fourth consecutive defeat. The latest defeat, coupled with a Swindon victory in Basingstoke the same night, had seen Tigers’ lead at the top of the table cut to three points, leaving Tigers desperately needing a victory on home ice.

In goal for Tigers was Brad Day, Adam Goss started for Bracknell.

Tigers lost another player on the opening shift of the game, with Dan Mitchell falling to the ice off the puck and having to leave the game.  Tigers’ possession was scrappy in the opening stages and this led to a Bracknell break away after Fin Howells turned the puck over at the Bees’ blue line. Roman Malinik skated in on Day’s goal but shot wide under pressure from Corey Goodison. In the 15th minute, Tigers were given their first power-play chance of the evening when Bracknell’s Brendan Baird was called for tripping Ricky Plant. Tigers opened the scoring with a scrambled effort from Jason Silverthorn after good work behind the goal from Plant and Scott McKenzie to send the puck in front for the Tigers’ captain to bundle the puck home. But Tigers’ lead didn’t last long with the Bees striking back within three minutes. Dominik Gabaj scoring from close range after a rebound from a shot eluded Day.

Tigers responded brilliantly to the equaliser by immediately retaking the lead. Dominik Florian won a race to the puck with a Bees’ defender and sent a pass to the slot to the onrushing Silverthorn who hammered the puck past Goss to give Tigers a 2-1 lead at the end of the first period.

The second period saw Tigers looking dangerous on the break but so were Bracknell. Plant went close for Tigers and Josh Smith shot over the goal from a good position for Bracknell.  Tigers lost the services of Thomas McKinnon mid-way through the period. The Tigers’ defender checked Gabaj from behind forcing him into the boards by the Bracknell bench. This caused a reaction from Josh Martin who was not on the ice. The Bracknell forward threw punches at McKinnon from the bench. A Bracknell player on the ice also dropped the gloves and went after McKinnon but somehow the officials called a roughing penalty against Joe Aston. The result of the altercation was both McKinnon and Martin were ejected from the game and the Bees had a power play.  Whilst shorthanded, Plant set up Jack Watkins but Goss made a superb sprawling save to deny him.  Tigers ended the period ahead in a very tight contest.

In the third period, Goss continued to deny Tigers making a terrific pad save from McKenzie’s shot and denying Whistle several times. Tigers’ discipline let them down again when Ollie Lord gave away a blatant tripping penalty giving Bracknell a power-play chance ten minutes into the period. Bracknell worked a neat passing move between Zack Milton and Gabaj to set up Harvey Stead for a tap in to equalise. Tigers pushed for the winner and went close when McKenzie was free in the slot but he shot straight at Goss.  Neither side could score, sending the game to sudden death overtime.

Tigers had plenty of possession but did not make it count and were caught out when a Florian shot went wide, bounced off the boards behind the goal and allowed Gabaj to break away on the Tigers’ goal. Despite the desperate attempts of Goodison to get back in position, Gabaj was able to skate in on Day and slip the puck past him to win the game for Bracknell and send Tigers spinning to their fifth consecutive defeat.

Tigers pick up a point but with Swindon winning in overtime against Basingstoke in Swindon, the lead at the top of the league is down to two points, setting up the next game which is a clash between the top two in Swindon.

After the game Head Coach Tom Watkins, commented, “It was another disappointing result to round off a frustrating weekend. Earlier in the season, these tight games were fixtures that we were picking up the points in, no matter the situation we had that belief in the group that we would find a way to win and we pulled off some remarkable wins. Mentally we’re struggling at the moment, that winning habit has abandoned us, with players struggling for confidence in key situations, making too many fundamental errors.  We have to be more ruthless when we create quality chances. This is a good group of players that are hurting right now and need the support of the fans more than ever.”

Hexagon Telford Tigers 1 will next be in action at home on Saturday 29th February against Peterborough Phantoms. Match Night tickets available to purchase here!