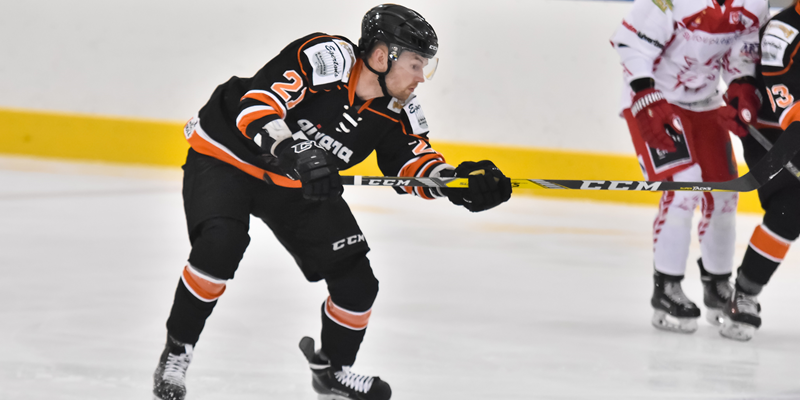 Telford Tigers 1 faced the first of back to back games against former EPL rivals Swindon Wildcats in the NIHL Autumn Cup on Saturday night in Wiltshire. Swindon are the only team this season to get the better of the Tigers, winning 4-1 in Telford the last time the two met.

Tigers faced off without the suspended Jonathan Weaver and were also missing Joe Miller.

The 1st period started badly as Swindon’s defender and ex-Tigers player Sam Zajac scored in the 2nd minute to give the Wildcats an early lead.  Tigers had a couple of power plays during the period but could not take their chances, ending the period trailing by one goal.

The 2nd period was a quiet one, with Tigers unable to trouble the Swindon net minder and Swindon maintaining their slender lead with solid defence.

The 3rd period started much better for Tigers, with an equalising goal in the 43rd minute, through Jason Silverthorn, scoring from a pass by Adam Taylor. But in the 51st minute, Floyd Taylor put the hosts ahead 2-1. Tigers pulled net minder Dennis Bell in the last two minutes to give them an extra attacker but, despite their best efforts, they could not take advantage.

Man of the match – Dennis Bell

After the game a disappointed Tom Watkins said, “We didn’t play anywhere near hard enough tonight. I expect more from the players individually and we needed a greater desire to win our battles”. Watkins added, “ Our work ethic off the puck was non-existent, our defensive zone coverage was sloppy and we lost our assignments all over the ice. Dennis Bell kept us in the game tonight”.