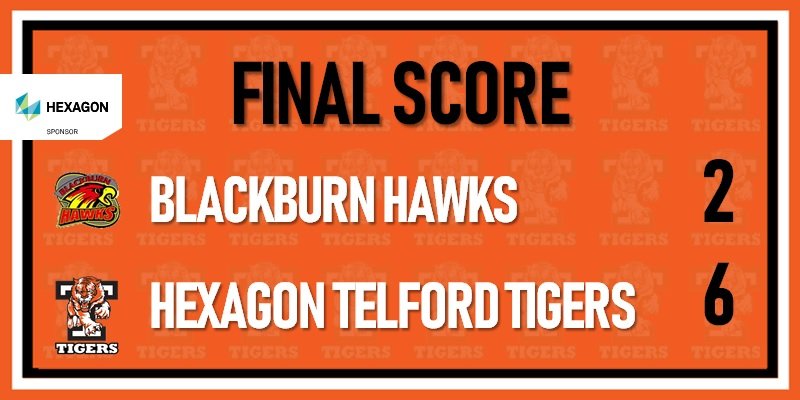 Tigers Swoop to Blackburn Road Victory.  Hexagon Telford Tigers 1 travelled to Blackburn on Sunday night for an NIHL Moralee Division game. Tigers had won convincingly the previous evening against Sutton Sting, with Doug Clarkson netting five goals in a 10-2 victory. Blackburn’s rink famously has a slope on it and the ice surface is often considered below par for hockey, with Tigers having struggled there in recent years. Tigers started the game in second place in the league with Blackburn in eighth having lost the previous evening to leaders Sheffield 11-2.

Tigers were still missing the injured Scott McKenzie and Dan Mitchell and were without defender Joe Hazeldine who was icing for Great Britain’s U20 team in Estonia. Starting in goal for Tigers was Tom Hovell and for Blackburn Niks Trappans.

Tigers made the perfect start to the game with Clarkson carrying on where he left off from the previous evening, scoring from Ricky Plant’s set up in the 4th minute. The goal being Clarkson’s 50th since returning to Tigers earlier this season.  Tigers were controlling the game and added a further goal in the 14th minute, with no surprise that the goal came from Clarkson again, this time set up by Andy McKinney.  A dominant period ended with Tigers adding a third goal thirty seconds from the break. McKinney scoring from Jonathan Weavers’ pass.

Tigers continued their dominance in the second period but only added one more goal. Blackburn’s Ross Kennedy was assessed a hooking penalty giving Tigers a power play. A minute into the power play, Weaver and McKinney combined to set up Adam Taylor to apply the finish to a neat passing move for Tigers’ fourth goal.

Tigers spent much of the third period in the Blackburn defensive zone and added a fifth goal in the 48th minute, Clarkson completing his second hat trick of the weekend after firing a wrist shot home from Corey Goodison’s pass. Five minutes later, Clarkson got his fourth of the game and ninth of the weekend with a slap shot after being set up by Taylor. Tigers cruised through the final five minutes of the game and took their foot off the gas a little as they conceded late goals from Aaron Davies and Peta Valusiak to ruin Hovell’s shut out bid.

Tigers’ win and four point weekend keeps them in second place in the league, a point behind leaders Sheffield with a game in hand.

After the game coach Tom Watkins commented, “I’m glad we had a four point weekend. It’s a tough place to come to play the way we want to. We started well but were sloppy in the second period and didn’t play with the right focus. Blackburn created a number of chances and I felt for Hovy (Hovell) as we conceded two goals that we shouldn’t have done, from simple breakdowns in front of him. I think we have a lot of guys that can (and need to) do the little things better for the full sixty minutes.”

Hexagon Telford Tigers 1 return to play at Telford Ice Rink Sunday 20th January 2019 at 18:00 in the NIHL Moralee Conference against Solway Sharks. Hexagon Telford Tigers 2 are next in home action at Telford Ice Rink on Saturday 19th January 2019 at 19:00 in the NIHL Laidler Conference against Bradford Bulldogs. For details of all future fixtures, check out the Tigers fixture list and www.telfordtigers.net/tickets for ticket information.