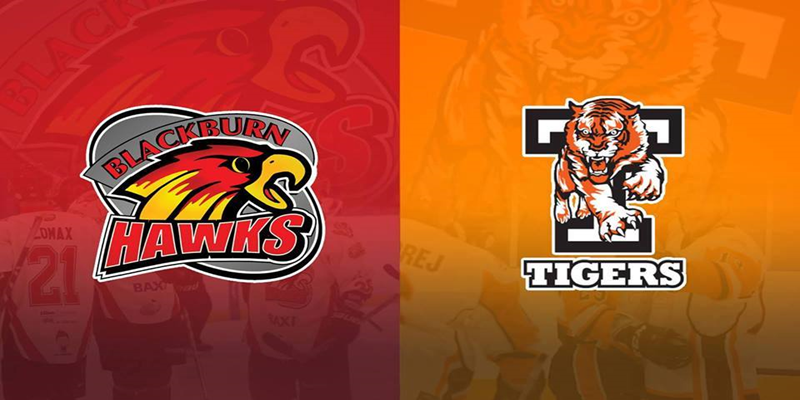 Telford Tigers 1 took a road trip to Blackburn Hawks on Sunday to play their first NIHL North league game for 2 weeks, after playing three consecutive Autumn Cup games. Tigers came into the game off the back of a heartbreaking defeat against Hull Pirates the previous night, giving away a three goal lead and losing with just 4 seconds left on the clock.

Tigers wanted to start the game strongly but fell behind after just 14 seconds when Lewis Baldwin beat Tigers net minder Dennis Bell with the first shot of the game. Tigers took some time to get into the game and appeared to be suffering from the previous night’s efforts, but equalised in the 13th minute through Dale White. Blackburn then hit the post and were unlucky not to score. This seemed to spur Tigers on and in the 17th minute, Joe Miller fired home to give Tigers their first lead of the night. But Blackburn equalised almost immediately, just 24 seconds later through Kieran Brown.

The second period started well for Tigers with Finnish import Kim Miettinen scoring his first goal for the club just 2 minutes into the period to put Tigers 3-2 ahead. With 28 minutes gone, Tigers had a crucial 5 on 3 power play. With Blackburn shorthanded by two players, Joe Miller took full advantage scoring from Danny Rose’s pass to increase Tigers lead to 4-2. And shortly after, Warren Tait scored his first goal of the season to give Tigers a three goal lead at 5-2. Tigers then scored a 6th goal less than a minute later, Miller getting his 3rd of the night forcing Blackburn to take a time out after conceding 3 goals in just 2 minutes. But despite this, a 7th goal was scored in the 39th minute by Captain Jason Silverthorn to give Tigers a commanding 7-2 lead at the end of the period.

The third period was only 3 minutes old when Tigers added an 8th goal through Silverthorn’s 2nd of the night. This would be the only goal of the period, with Miller missing a one on one chance to get his 4th. Tigers saw out the period and remain top of the table with a 100% win record in the league.

Man of the match – Joe Miller

After the game coach Tom Watkins said, “We managed to get a key win on the road tonight. We started slowly and the Blackburn ice is certainly a home advantage. We played very strongly in the second and effectively put the game to bed and got over the hump of defeats of late!” Watkins added, “It was a good victory on the road and I must also say a big thank you to all our travelling fans this evening, it was great to see that support.”

Telford Tigers 1 are next at home on Sunday 29th October against Hull Pirates with a 6pm face off. For more information and ticket details go to www.telfordtigers.net