Tigers Taken Down by Bison. 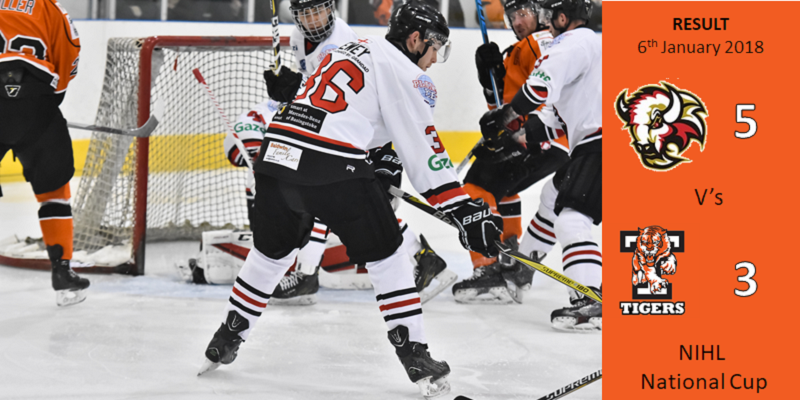 Telford Tigers 1 took a road trip on Saturday night to Basingstoke to take on the Bison in a National Cup Group D game. Tigers had already qualified for the quarter finals with 2 group games still to play.

Tigers struck first in the 7th minute when Adam Jones shot through the legs of Basingstoke’s net minder Dean Skinns. Tigers added a second goal in the 10th minute, Ricky Plant scoring after neat passing from Jason Silverthorn and Jonathan Weaver. Tigers would end the period firmly on top and with a 2 goal lead.

Basingstoke started the 2nd period in much better fashion and got on the score sheet in the 26th minute through ex Tigers’ player, Dan Scott. Bison then hit the post and went close a couple of times but the period ended with the Tigers holding a narrow 2-1 lead.

Basingstoke levelled the score just 2 minutes into the 3rd period through another ex-Tigers’ player Dan Davies. And it was Davies who gave Bison their first lead of the evening when he scored his second of the night on the power play in the 52nd minute.  Tigers responded with an equaliser of their own when Scott McKenzie managed to scramble the puck home from close range to tie the game at 3-3.  Tigers would only be level for a minute as Stuart Mogg caught out the unsighted Tigers’ net minder Dennis Bell with a back handed shot into the net. For the Tigers, the game was gone in the 57th minute when Aaron Connolly scored to give Bison a 5-3 win.

After the game coach Tom Watkins said, “The boys played hard tonight and competed well in a game that meant nothing. We got a good start which is great but slowly Basingstoke came back into the game. We got away from our defensive zone structure on a couple of goals, which serves as a good reminder for the players and hopefully we learn from that.”

The final group game is against Bracknell Bees and will take place on Thursday 11th January 2018 with a 7:45pm face off. For more information and ticket details go to www.telfordtigers.net.