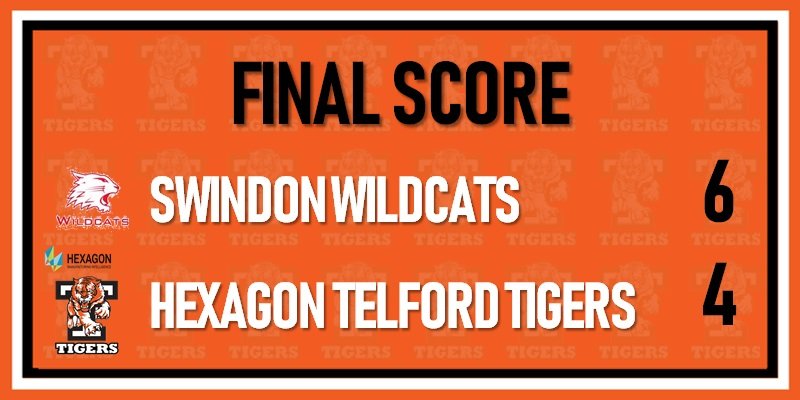 Tigers Tamed by Wildcats, Hexagon Telford Tigers 1 travelled to Swindon on Saturday night to take on the Wildcats in the 1st of back to back Autumn Cup games.

Prior to the game, Tigers’ coach Tom Watkins had called on the team to ensure they got something out of the cup double header as Tigers had lost their previous two Autumn Cup games to Peterborough and were currently sitting bottom of the North table. Watkins was also expecting to be missing some key players as Tigers lined up without Jonathan Weaver and Jack Watkins.

The 1st period was one to forget. Tigers went behind in the 8th minute when Floyd Taylor scored for Swindon. This was closely followed by successive goals from Loris Taylor and Adam Harding to put Swindon 3-0 ahead. Tigers then had an opportunity to get back into the game with a power play in the 13th minute. But it was Swindon who would score next, with Sam Jones scoring a short handed goal to increase the lead to 4. Tigers changed net minder, with Denis Bell replacing starting net minder Tom Hovell. Bell had barely seen any action in the game before Swindon scored their 5th goal with Harding scoring his 2nd to end a dominant period putting Swindon 5-0 ahead.

Tigers finally started to get into the game in the 2nd period and scored with 3 minutes gone in the period. Jason Silverthorn scoring from Andy McKinney’s pass. A minute later, Silverthorn returned the favour by setting up McKinney to cut the lead to 3. Tigers went close a couple of times but ended the period trailing 5-2.

Tigers then cut the lead further in the 44th minute when Silverthorn scored his 2nd goal of the night, with McKinney supplying the pass again. Tigers went into the last 10 minutes chasing the game and got caught in the 52nd minute when Jones set up former Tigers’ player Max Birbraer for Swindon’s 6th goal. Tigers cut the deficit once again in the 56th minute, Joe Aston scoring  from Ricky Plant’s pass. With 2 minutes of the game left, Tigers pulled net minder Bell, to gain an extra attacker, but could not score the 2 goals needed and fell to their 3rd Autumn Cup loss of the season.

After the game coach Tom Watkins said, “We gave ourselves a mountain to climb after giving up 5 goals in the first period. We didn’t look interested, we were second to pucks, lost battles and gave away a ton of time and space, even when we had the opportunity to outnumber and separate Swindon players. There was a big turnaround in our desire to compete through the 2nd and 3rd periods but ultimately, it was too little too late.”

Watkins added “We are very grateful to Steve Nell, the Wildcats Club and their fans for supporting the #wearredforzac campaign tonight.”

Hexagon Telford Tigers next play at Telford Ice Rink Sunday 30th at 18:00 in the return Autumn Cup Fixture. For details of all future fixtures, check out the Tigers fixture list and www.telfordtigers.net/tickets for ticket information.