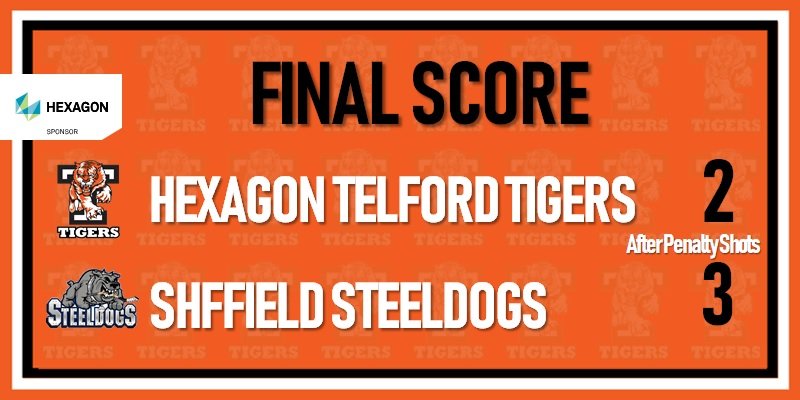 Tigers’ Title Hopes Hit By Shootout Despair.  Hexagon Telford Tigers 1 faced off against Sheffield Steeldogs in a vital NIHL Moralee Division game on Sunday night at Telford Ice Rink. Tigers led the league by a single point from Sheffield and Hull and had won 7-1 in Blackburn the previous evening to hold on to top spot. With only three games remaining in the league, both teams came into the game knowing that the two points on offer would go a long way towards deciding each team’s fate in the title race. Tigers also knew that anything less than a victory would hand their opponents the advantage in the head to head meetings between the teams which may prove vital should the teams finish level on points at the end of the season.

Tigers were able to add Fin Howells, Jed Moreland, Ryan Lewis as back up net minder and James Smith to the line up, but were without Dan Mitchell and Andy McKinney. Tigers started with Sam Gospel in goal and Sheffield started with Dimitri Zimozdra.

A breathless first period saw Tigers dominate in respect of possession and shots but they were unable to make the breakthrough their play deserved. Early on Danny Rose hit a powerful slap shot which Zimozdra blocked and Scott McKenzie fired over the goal from a tight angle with the rebound. Tigers were showing lots of aggression in a positive way, making hits and battling hard for the puck. McKenzie went close again in the 9th minute but Zimozdra saved his shot. Gospel was then called on to make a key save when Sheffield’s Duncan Speirs had a clear shot on goal but Gospel denied him with a pad save. Tigers finished the period with lots of pressure on the Sheffield goal but unable to score the all important first goal.

The second period continued in the same vein with both teams spurning power play chances. Tigers came closest to scoring when Jason Silverthorn beat a defender and hit a wrist shot which Zimozdra acrobatically saved. The game got feisty midway through the period with Sheffield’s James Spurr getting away with a clear slash on Sam Gospel. Tigers’ Jordan Stokes took exception to the slash and went after Spurr with both players dropping the gloves and receiving fighting penalties.  Shortly after Sheffield’s Lewis Bell and Tigers’ Joe Aston were given roughing penalties after an altercation.  Despite Tigers’ dominance on the shot count, the best chance of the game fell to Sheffield with just twelve seconds left in the period. Milan Kolena was sent clear on a break away but his rising slap shot was saved by Gospel. Both teams looked exhausted and welcomed the break at the end of the period.

The first goal of the game was scored in the 46th minute when Cameron Brownley was sent clear on a breakaway by Adrian Palak. Brownley shot into the roof of the net giving Gospel no chance.  Tigers responded in the 50th minute with a goal of their own. Silverthorn and McKenzie combined to give Silverthorn a shot at goal, the shot was blocked on the line by Zimozdra’s skate but Adam Taylor was first to the puck to tap home the equaliser.  Tigers had a glorious opportunity to score when Smith was sent on a break away but Zimozdra stood tall and kept the puck out. Tigers then took the lead in the 58th minute when Ricky Plant’s shot was expertly tipped past Zimozdra by Silverthorn.  As the game entered the final minute, McKenzie gave away a needless tripping penalty giving Sheffield a vital power play. Sheffield pulled Zimozdra from the goal to give them six attackers. Steeldogs made the numerical advantage pay with just twenty two seconds left. Spurr getting the final touch after a goalmouth scramble to level the game and send the tie into sudden death three on three overtime.

Tigers had the best opportunity of the extra period when Warren Tait brilliantly set up Jack Watkins, but Zimozdra pulled off a magnificent save to deny him. Referee Matthews then angered the crowd by refusing to call a clear tripping penalty when Weaver was taken down by a Sheffield player. The game remained level at the end of overtime meaning a penalty shoot out would decide the game.

The first five penalty shots were missed, leaving Sheffield’s Nathan Salam the opportunity to win the game with the final shot. Salam hit a wrist shot past Gospel, into the net to win the game for the Steeldogs and put a severe dent in Tigers’ title hopes. Tigers gain a point from the game but are now level on points with both Sheffield and Hull with two games to go.

After the game coach Tom Watkins commented, “It was tough to lose tonight. I felt we were the better team for long periods, heavily out shooting them again. I really feel for the guys, they worked tirelessly again without the reward of two points which I think we deserved.

We showed good character to come back to take the lead after going behind in third period and with less than thirty seconds to go, we give up the tying goal after a mad scramble at our net front. We picked ourselves up and created good chances in overtime, Jack (Watkins) had the game on his stick after a good feed from Woz (Tait).”

Watkins added, “I’m disappointed with a couple of none calls that I felt cost us in the overtime period but the ref had put his whistle away. We outshot them by 45 to 25 tonight, outshot them by 14 last week, but we are without two of our top goal scorers and we need someone to fill the void and capitalise in those situations. Our effort, commitment and work rate was there for everyone to see but essentially we’re playing short as we are without a couple of key guys and that hurts us when it comes down to the fine margins we’re talking about.”

Watkins also said, “We keep patching a team together, we’ve used 7 goalies this season, which is a first for me, we’re playing with kids in places who are doing a good job and I’m very grateful for the support I’ve received from Callum Bowley for allowing us to call on some Tigers 2 guys.”