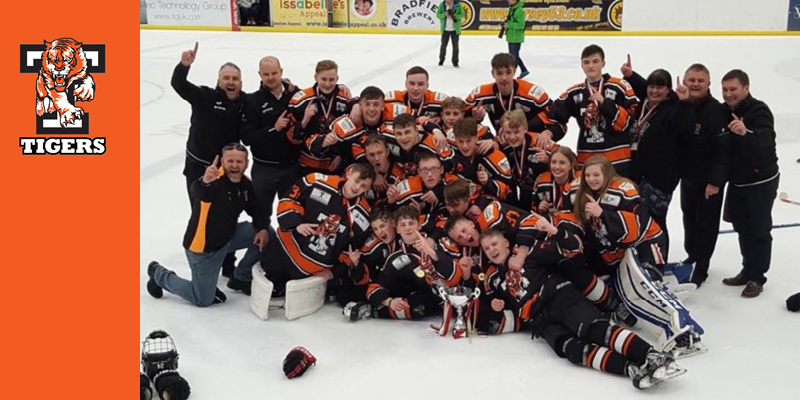 Telford’s U18 ice hockey stars have been crowned national champions after a thrilling finals weekend in Sheffield.

The young Tigers triumphed against both the northern and southern league champions to take the end-of-season play-off title over the Bank Holiday.

Lisa Howells, chair of Telford Junior Ice Hockey Club, said: “Seeing our coaches and players lift the trophy was a fantastic end to an exciting season. Everyone is so proud of the U18s squad, who have worked hard for this all year, and our brilliant coaching team of Ian Jesson, Mike Clancy and Tom Watkins.”

The squad then faced Billingham in the final – the team who had pipped them to the regular season title. But Tigers were able to put that behind them and came back from 2-0 down to run out 3-2 winners, with goals from Louis Morgan and Jed Moreland (2).

TJIHC head coach Tom Watkins said: “I have coached many of these kids since they took their first steps on the ice, so I am incredibly proud of their achievement. They showed real resilience and character against two very tough teams.

“It was also a fitting way to sign off for four of our oldest players. Brodie Jesson, MJ Clancy, Nathan Scullion and Will Reed move into senior hockey now, and I am confident all face a successful future in the sport.”

TJIHC runs teams from U9s to U18s, offering ice hockey to boys and girls from as young as five. Telford Tigers operate Learn to Play courses with equipment provided, enabling beginners to try out the sport and develop the skills needed to join their age group team.