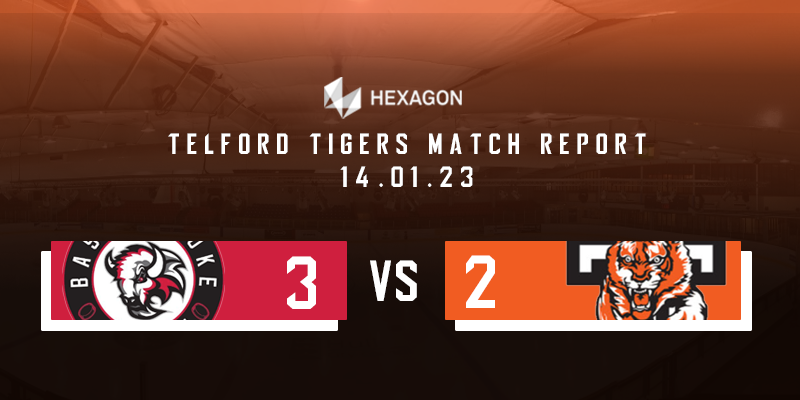 Tigers Unlucky in Narrow Defeat. Hexagon Telford Tigers travelled to Basingstoke to take on the team that had beaten them in their last game. Telford had announced in the week that Jason Silverthorn and Nick Oliver had injuries that would see them out for the rest of the season adding to the club’s current woes. Tigers were also without Jonathan Weaver who was unavailable, alongside Ricky Plant. However, Connor Keyes, Liam Bartholomew and Charlie Webb stepped up from the Laidler Division team.

Tigers were desperate to get off to a good start in a rink where they have had a poor record of late and a venue that is often described as the worst rink in the league. Unfortunately an early penalty called against Danny Rose for interference proved damaging as Aiden Doughty opened the scoring for Basingstoke on the subsequent power play. The Tigers’ bench were unhappy with the goal as they believed it was offside.

Tigers started the second period in better form and pulled a goal back when Sam Watkins took advantage of some lax defending by Basingstoke to pass to Jake Price who smashed the puck past Jordan Lawday into the Bison goal.

But Basingstoke restored their two goal lead shortly after when a defensive turnover allowed Liam Morris to shoot past Brad Day.

Tigers pushed to reduce the deficit in the third period and with ten minutes of the game left, Jay King was called for hooking giving Telford a much needed power play. Fin Howells missed a glorious chance when he shot wide with the goal at his mercy but Telford recycled the puck and Vladimir Luka passed across goal to Scott McKenzie who slammed the puck home to draw the Tigers within a goal of the hosts.

Bison’s Doughty then left the game on a stretcher after a nasty collision with the boards.

Despite throwing everything at the Bison goal and pulling Day for the final minute of the game, Tigers could not get an equaliser and fall to another defeat.

After the game Head Coach Tom Watkins, commented, “We hope Aiden Doughty is ok. You never like to see a player leave the game on a stretcher. We did everything we could tonight, every player stepped up and played really hard, gritty, committed and for me the better team lost this evening but we conceded the first goal which was a long way offside but we battled hard to come back. We created so many really good chances and had lots of opportunities we didn’t take advantage of unfortunately and we were knocking on the door all night. Our power play moved the puck well and came up with a big goal and other than the first goal against us our penalty kill was strong and killed a lot tonight. We have to be better with our discipline but equally the officiating is questionable at times.

It was an outstanding performance from Sam (Watkins) both offensively and defensively he must have blocked about 12-15 shots tonight which doesn’t go unnoticed by his teammates or opposition. The team dug deep, if we keep playing with that spirit we will get our rewards. I thought the players that stepped up from the Laidler team did a great job and we appreciate their support.”