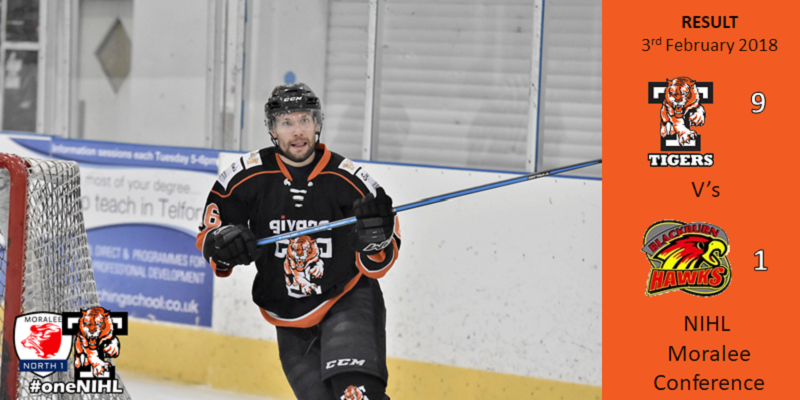 Telford Tigers 1 faced off against Blackburn Hawks in the NIHL Moralee Division on Saturday night at Telford Ice Rink.  Tigers had beaten Blackburn in both previous meetings between the teams this season, but victory in the game in Blackburn had been overturned as Tigers did not have the required bench coach and the points were awarded to Blackburn.

Tigers had added deadline day signing Macauley Halford to the roster and saw import forward Filip Supa return after being stretchered off in the last game following a collision with the referee.

Tigers started the game strongly and opened the scoring in the 5th minute. Scott McKenzie played a diagonal pass to Adam Taylor who burst into the Blackburn end with speed and fired home a wrist shot into the top left hand corner. Net minder Dennis Bell also was credited with an assist on the goal.  Blackburn responded less than a minute later with Josef Istocy shooting the puck through the legs of Bell to level the game.

Tigers regained the lead in the eight minute when Ricky Plant tipped Adam Jones’ blue line shot past Blackburn’s net minder Niks Trapans. Tigers then scored 10 seconds later to add a third goal. Silverthorn won the face off and passed to Adam Jones who sent a long pass to Taylor in the Blackburn defensive zone. Taylor picked out Halford at the far post who slid the puck into the net. Tigers ended the period 3-1 ahead.

In the 27th minute Tigers scored a fourth goal after Ricky Plant passed from behind the Blackburn goal to Dale White who slammed the puck into the net. Tigers then had a goal disallowed when a shot from close range entered the net, but referee Hamilton had blown the play dead just before it went in. Bell then made an incredible save after the puck had deflected off a Blackburn players’ skate and wrong footed him, Bell managed to clear the puck off the line with his stick whilst falling backwards.

Tigers did score the fifth goal in the 39th minute. Ricky Plant skated with the puck from behind his own goal line to the Blackburn end and then played a perfect drop pass to Brodie Jesson who scored with a wrist shot. Tigers closed the period firmly in control with a 5-1 lead.

Tigers scored their sixth goal in the 47th minute whilst on the power play. Jason Silverthorn tipping Jonathan Weaver’s shot past Trapans. Tigers seventh goal was scored whilst Blackburn were on a power play and Tigers short handed. Adam Taylor was sent clear by Warren Tait and he finished with a cool wrist shot. Just 32 seconds later, Taylor and Tait broke clear and combined for Tait to score the eight goal.  After the goal, Blackburn changed their net minder with Stuart Ashton replacing Trapans. Tigers wasted no time in adding a ninth goal – Nick Oliver’s shot was too powerful for Ashton, going through the his legs into the net to score his first goal for the club. Tigers’ win closes the gap to leaders Sheffield Steeldogs to 2 points.

Man of the match – Adam Taylor

After the game Coach Tom Watkins said, “Tonight was not our best performance but we did more than enough to get the points. I moved the lines around to try to get some more balance across all three lines. At times we were excellent and other times we made some poor decisions. We will have to play for the full sixty tomorrow against Hull and do the little things better”.

Watkins added” I really liked the atmosphere in the rink tonight and it was fun to hear the fans chanting. The players and I would like to send our best wishes to the little boy who got hit in the head with the puck and unfortunately had to go to hospital. I hope he is ok”.