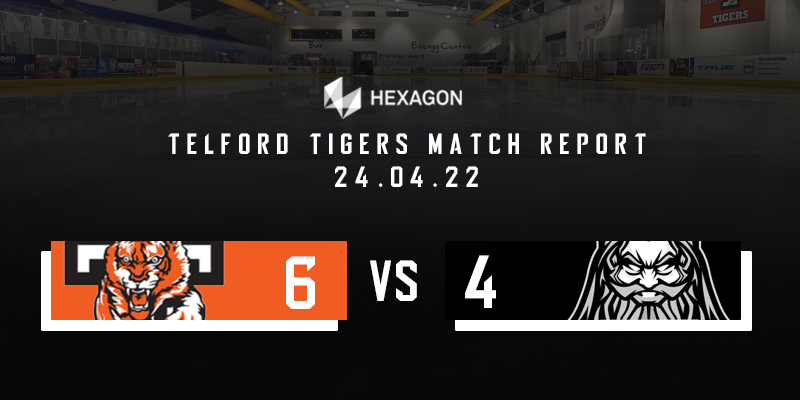 Tigers Victory Wins Playoff Group. Hexagon Telford Tigers played their final group stage game of the National League Playoffs with their place in the Final Four already secured courtesy of a victory over Leeds Knights on Friday. Milton Keynes had also qualified for the semi-finals with a victory over Bees and the game would decide which team would top the group. Milton Keynes came into the game a point ahead of Tigers but had yet to win this season in Telford.

The game had an end of season feel about it from the start with neither team over-committing. Tigers went close early on when Nick Oliver struck a slap shot off the side of the post. Milton Keynes opened the scoring in the eighth minute with a 3-on-1 breakaway. Tyler Nixon sent a pass across the goal to Callum Field who tipped the puck past Brad Day.

The goal seemed to wake Telford up as the upped the intensity and late in the period scored twice. Scott McKenzie was sent clear on goal by a stretch pass from Jake Price. McKenzie controlled the puck and then hammered a superb shot past Brandon Stones in the Milton Keynes’ goal.  With thirty seconds of the period left, Tigers took the lead. Lightning were assessed a too many men penalty, gifting Telford a power play which they took full advantage of. Jason Silverthorn hit a shot from the blue line that Stones could only parry and McKenzie was on hand to slam home the rebound for Tigers’ second goal.

Tigers dominated most of the second period and but for some wayward shooting would have been ahead by a considerable margin. Vladimir Luka hit the post and McKenzie, Joe Aston and Austin Mitchell-King also went close.

Somehow Milton Keynes withstood the constant pressure and broke away to score twice. Mikey Power scored from close range and then Hallden Barnes-Garner scored after a lucky bounce on the boards led to Lightning having a 2-on-1 breakaway.

For the second time in the game Tigers scored in the final thirty seconds of the period and it was a superb individual goal. Luka took possession of the puck at centre ice, skated past three Milton Keynes’ players and then hit a backhanded wrist shot into the top left-hand corner of Stones’ goal to draw the sides’ level.

Early in the third period, Tigers took the lead.  Price and Andy McKinney combined to set up Fin Howells who continued his recent rich goalscoring form with a wrist shot past Stones.

Tigers went further in front when Luka found Danny Rose in space and the Tigers’ defenseman smashed a low shot past Stones for Tigers’ fifth goal.

Tim Wallace pulled a goal back for Milton Keynes but Telford immediately restored their two-goal lead when Ricky Plant sent Mitchell-King clear on goal to wrap up the points and send Tigers to the top of the group standings.

Tigers now face Sheffield Steeldogs in the first semi-final in Coventry next Saturday, whilst Milton Keynes will play Peterborough Phantoms.

After the game Head Coach Tom Watkins, commented, “It was a good end to our last home game of the season. For us it was important we won so we can go into next week with a positive performance and good habits.

We seemed to have a lot of offensive zone time but we weren’t creating a lot of quality chances, not getting many pucks through in the first and second periods but I felt in the third period, with some adjustments, we did create the quality and took our chances well.  I’d like to say a huge thank you to all our club volunteers who work tirelessly for the club. There are probably around 50 people or more that support the club in different capacities and, as General Manager, I know they do a tremendous job. The club simply couldn’t function without that support.”