Tigers Whistle up Shoot Out Win 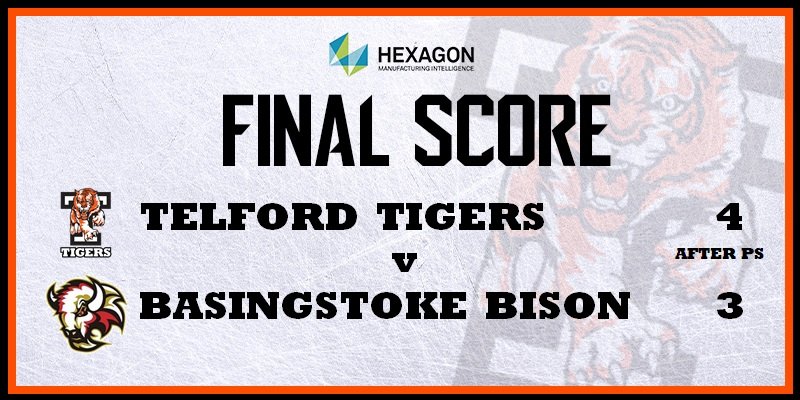 Tigers Whistle up Shoot Out Win. Hexagon Telford Tigers faced off against Basingstoke Bison on Sunday night at Telford Ice Rink. Tigers led the league by seven points at the start of play, with Telford winning against Leeds Chiefs in Solihull the previous evening to maintain the gap in points from second-placed Swindon Wildcats. Basingstoke sat third in the table and came into the game on the back of a 5-2 win over Hull Pirates.

The two starting netminders were Brad Day for Telford and Alex Mettam for Basingstoke.

Tigers almost scored off the first attack of the game with Ricky Plant setting up Jason Silverthorn but Mettam made a pad save. Tigers were playing well and getting into the Basingstoke defensive zone at speed but could not get past Mettam. Basingstoke were dangerous on the break and went close when Sean Norris broke in on goal. Day made a terrific block to prevent a goal.

Day thwarted Basingstoke twice more when Bison forwards were in on goal.

Tigers’ only penalty of the period – a late hit by Jack Watkins – proved costly as Bison opened the scoring on the subsequent power play. As the power play reached the final ten seconds, an unlucky bounce gave the puck to Liam Morris who fired low past Day.

Tigers would finish the period with a short 5-on-3 power play after Jay King was called for tripping and Richard Bordowski for a face-off violation. Tigers’ luck deserted them, as Ross Kennedy’s slap shot rang off the post and was cleared before any of the Tigers’ forwards could get to the rebound. Mettam made a further two terrific saves from Brandon Whistle to prevent an equaliser. Tigers headed to the break a goal down but playing the better of the two teams.

Early in the second period, Tigers drew level with a power-play goal. Plant passed the puck towards goal and a goalmouth scramble ensued. Whistle was able to smash the puck home from close range to score. Tigers were back level and dominating in terms of shots but could not get past Mettam again.

At the halfway stage of the game, disaster struck as Tigers conceded two goals in less than a minute. Adam Taylor mishandled the puck on the Basingstoke blue line allowing Adam Harding to send George Norcliffe on a breakaway. Norcliffe shot the puck between the legs of Day and the puck went in off the Tigers’ netminders’ skate and into the net. Bison scored again just forty-five seconds later. Sean Norris caught out Day with a shot from a very tight angle which went off Day’s back and banked into the net.

Tigers then lost the services of Andy McKinney after an altercation with Basingstoke’s Adam Jones resulted in the Tigers’ forward being ejected from the game and the Bison gaining a five-minute power play.

Tigers would start the third period with two minutes of the penalty to kill and two goals behind.

The penalty was successfully killed off and Tigers luck didn’t change with Whistle going close with a terrific breakaway, beating the Bison defence but his shot hit the post.

Bison’s Tom Ralph then took a tripping call, giving Tigers another power-play chance. Despite maintaining possession, and peppering the Basingstoke net with shots, it wasn’t a well-worked move that Tigers scored from. Dominik Florian scored a superb individual goal, battling through the Basingstoke defensive zone, controlling the puck under pressure and creating an opening, before smashing an unstoppable wrist shot past Mettam to bring the Tigers within a goal of Basingstoke. The crowd were with the team and the noise level was off the scale shortly after when Tigers tied the game. Whistle, found the onrushing Scott McKenzie, who skated in between the circles and slammed the puck past Mettam to make the score 3-3.

There was still time for a winner and both teams had chances, Corey Goodison hit a slap shot which rang off the bar and Ryan Sutton for Basingstoke missed a glorious chance with Day beaten, Sutton’s shot went wide of an open goal.

The period ended with the teams level and the game went to overtime. Tigers dominated the extra five minutes and were unlucky to have a Plant goal disallowed for interference. Tigers had all the possession and chances but once again Mettam stood tall and stopped each shot.

The game would be settled by a penalty shoot-out. All of the first four shots from the two teams were missed, with McKenzie and Florian missing for Tigers. Basingstoke’s Bayley Harewood’s went third for the Bison and his shot was well saved by Day. Whistle stepped up for Tigers and won the game with a superbly placed wrist shot.

Tigers’ win maintains the seven-point lead they hold at the top of the table.

After the game Head Coach, Tom Watkins commented, “You can’t write us off whatever the situation. Tonight is a huge result for us and another 4 point weekend. I’ve got to mention the mindset of this group, they are very focused, very resilient and have got the ability to dig us out of a hole. We always felt if we could get to the slot and find a little space we would get our reward. Basingstoke defended their goal very well and kept us to the outside for most of the game with Alex Mettam very composed in goal. We stuck with it, kept doing the things we felt would give us quality opportunities and were able to do that in the third period, scoring two big goals.

I have to mention the third-period support from our fans, they really got behind us, they saw the commitment from the guys and together we pulled one out the bag.”

Hexagon Telford Tigers 1 will next be in action at home on Sunday 19th, January against Leeds Chiefs . Match Night tickets available to purchase here!