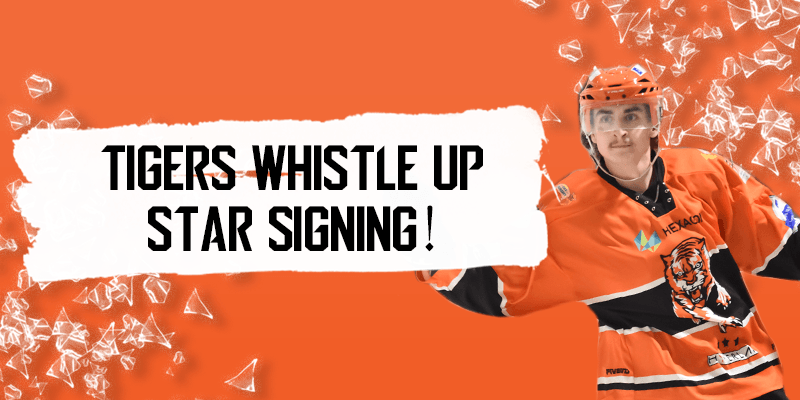 Telford Tigers are ecstatic to announce the return of fan favourite Brandon Whistle for the 2020/21 season. Whistle will return for his second year with the Tigers and will continue to wear the number 34 shirt. Whistle was a huge part of the team that won last year’s NIHL League and Cup double, specialising in scoring crucial penalty shot goals and coming up with clutch performances in the title run in. Whistle scored 69 points for Tigers last season including the winning penalty shot in the epic comeback win over Swindon Wildcats in the National cup semi final.

Brandon stated, “I’m excited to come back to Telford for another year, I really enjoyed my time there last season, we had a great team and great team spirit in the dressing room! I am looking forward to trying to repeat our success and bring some more trophies to the club and to reward our fans for their support!”

Tom Watkins, Head Coach and General Manager, said, “I am very excited to be able to retain Brandon for a second season as he made a lasting impression on the club and the fans last season. He scored numerous penalty shot goals and he was a top performer in the cup final and showed his ability in the key games towards the end of the season. He turned it up in the big occasions and played without fear when we had a lot to play for. He’s an exciting player to watch and capable of creating something out of nothing. He can score, make plays and create space for others. He has all the tools needed and formed a terrific partnership with Scott McKenzie. We spoke at length about his future and as soon as he confirmed he was interested in coming back, we were very keen to make it happen. Players of his calibre are very hard to find.”

We would also like to thank Williams and Lamb who have agreed to be Brandon’s individual sponsor for a further season. Brandon’s own and loan shirts are available to order now for £100 each (Home and Away). Please see the Tigers’ Online Shop for details.

Watch out for further details about new signings at Telford Tigers, visit: www.telfordtigers.net/news or catch up on Facebook or Twitter.