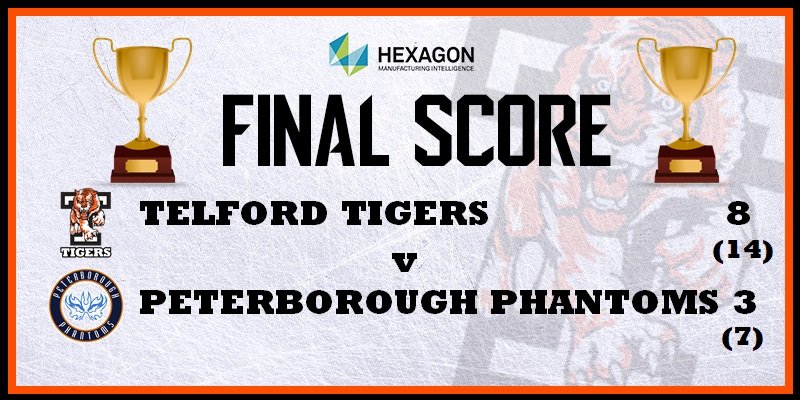 Tigers Win National Cup. Hexagon Telford Tigers faced off against Peterborough Phantoms at Telford Ice Rink in the second leg of the National Cup Final. Tigers had won the first leg 6-4 in Peterborough after a hard-fought game.  Tigers were starting what could be a historic week for the club, with the cup final being followed by Tigers playing against Raiders in the forthcoming weekend and knowing that just a single point will seal the league title.

Tigers were able to ice a full roster with the exception of Thomas McKinnon who was suspended and James Smith who was unavailable.

Brad Day started in goal, with Jordan Marr in goal for Peterborough.

Tigers made a dominant start to the game from the opening faceoff and barely allowed Peterborough a touch of the puck. As the game entered the second minute, Tigers opened the scoring. Scott McKenzie passed to the unmarked Brandon Whistle in the slot. Whistle hammered a shot low past Marr into the bottom corner of the goal, giving Tigers a dream start. Shortly after, Peterborough were given an opportunity to get back into the game when Jack Watkins was called for elbowing but it would be Tigers who would score whilst short-handed. Peterborough lost control of the puck in the Tigers’ defensive zone allowing Whistle to take possession and skate towards goal. The Phantoms defence were slow to react, allowing Whistle far too much time to shoot low past Marr again to give Tigers a second goal. The next penalty was called against Peterborough’s Will Weldon for tripping giving Tigers a power play. The power-play unit needed just four seconds to add a third goal. Jonathan Weaver’s shot was deflected by McKenzie and then Ricky Plant past Marr and trickled into the net off the Peterborough netminder’s body. Peterborough looked stunned by the opening seven minutes of the contest but hit back with a goal from Petr Stepanek who backhanded the puck past Day from a rebound.  Tigers didn’t let the goal affect their confidence and scored a fourth goal to seal a magnificent period of hockey. Jason Silverthorn brilliantly won the puck, accelerated towards goal and placed a perfect wrist shot over Marr’s glove and into the net.

Tigers started the second period in the same vain. Jack Watkins going close in the opening seconds. Peterborough tried to fight back but were met by an orange wall. McKenzie throwing himself in front of a shot to block it. Day also made a number of solid saves.  Tigers then scored their fifth goal, one that their dominance deserved. Ross Kennedy hammering a slap shot from the blue line past Marr who was screened by a Tigers’ player. Tigers added a sixth goal whilst on the power play after Martins Susters was called for tripping. Whistle completed his hat trick with a low shot after being set up by Jonathan Weaver.  Peterborough continued to battle and push forward despite the massive deficit and gained a consolation goal when Padelek scored to make it 6-2. Once again though, Tigers struck back with another goal. As the period was ending, Whistle broke up the ice and squeezed a shot towards goal that was deflected by Joe Aston, forcing the puck in from the tightest of angles for Tigers’ seventh goal, making the aggregate score 13-6 at the end of the second period.

The third period started with an eighth Tigers’ goal. Plant led a 2-on-1 breakaway, passed across goal to McKenzie who backhanded the puck past Marr. Tigers continued to dominate and went close with shots from Aston and Sam Watkins. As the period went on, Tigers sensibly maintained possession and ran down the clock. Peterborough’s Tom Norton scored a late consolation goal but nothing could dampen the spirits of the fantastic home crowd, with the whole rink standing up for the last two minutes of the game, roaring their approval as the buzzer sounded and the players on the ice celebrated the cup victory. Captain Jason Silverthorn collected the trophy and celebrated with the team and coaches in front of the Tigers’ supporters

Man of the match: Brandon Whistle.

After the game Head Coach Tom Watkins, commented, “ It was a great performance from the first shift to the last. We knew if we could score first or/and win the first period it would put Peterborough on their heels, psychologically it’s a tough situation for them, but to finish the first period 4-1 up gave us a big advantage, once we got ahead it was all about managing the puck well and being disciplined. Tonight was a different situation than the previous round, coming in ahead after the first leg presents different pressure but I thought we dealt with that in an excellent manner which showed in our performance, mentally we were very strong.

We couldn’t have got a better start than we did, the guys were really on it, were lethal in front of goal with some excellent finishes from Silvs (Silverthorn) and Scott (McKenzie) but particularly Brandon Whistle who stood out and led from the front with some big plays, goals and overall huge performance.

It’s a great night for the players, they’ve worked extremely hard and had to battle every night to be here where we are now. Hopefully, this is the start of an exciting week for everyone connected with the club. We have had excellent support all season from fans and sponsors, it’s great to see so many people getting behind the club, it really was a great atmosphere and special night.

This is a great reward for everyone’s dedication over the last three years not least Mike Washburn, Ian Howles and all the volunteers who make this club tick.”

Hexagon Telford Tigers 1 will next be in action at home on Sunday 15th March against London Raider. Match Night tickets available to purchase here!