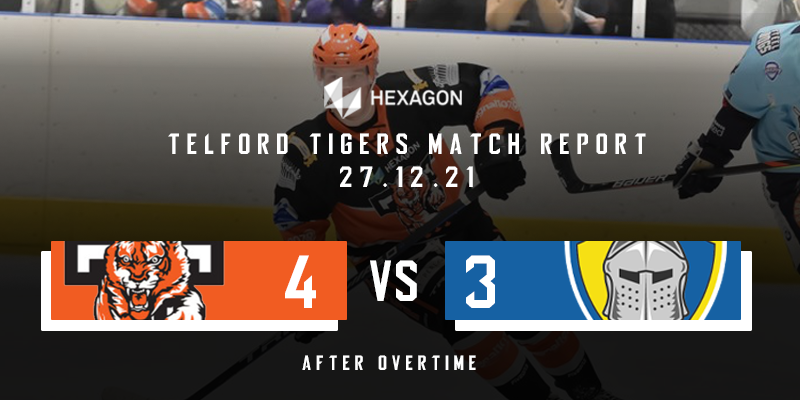 Tigers Win Overtime Thriller. Hexagon Telford Tigers returned to home ice after the Christmas break to take on Leeds Knights. The Yorkshire side had recently lost in the final of the Autumn Cup but had found some form in the league – winning their last three games which had seen them climb to fifth in the league standings.  League leaders Swindon Wildcats had surprisingly lost to struggling Basingstoke Bison at home on Boxing Day, giving Tigers a chance to close the gap between the two teams.

Tigers were almost back to full strength but saw Nick Oliver and Jack Hopkins join Ricky Plant, Andy McKinney and Jack Watkins as unavailable for the game.

Tigers made a disastrous start to the game and conceded after just thirty-four seconds. Tigers’ defence failed to clear the puck from their defensive zone and gifted possession to Brandon Whistle, the former Tigers player scrambled the puck past Brad Day to open the scoring. The poor start seem to affect Tigers as they struggled to get going and saw Day called upon to prevent a second goal. Midway through the period, Tigers were level. Jason Silverthorn led a 2-on-1 breakaway and his shot was saved by Sam Gospel in the Leeds’ goal but the puck fell perfectly for Austin Mitchell-King to finish into the open net.

Tigers had several power-play chances as Leeds committed numerous infractions and the Leeds’ bench was getting upset with every call made, which saw referees Wells and Williams in lengthy discussions with various Leeds’ players. Tigers’ power-play unit had little success and barely troubled Gospel.

With Leeds’ players in the ear of the officials with every call and their coach’s histrionics on the bench, it was no surprise when Tigers were called for two innocuous penalties early in the second period. Thomas McKinnon was called for roughing after he reacted to Kieron Brown’s glove to the face but the initial offence from Brown was ignored which was followed by a slashing call on Corey Goodison, giving Leeds an extended 5-on-3 power play. Tigers defended resolutely and killed off both penalties.

Tigers were then given another power-play chance when Jordan Griffin was called for hooking. Finally, at the fourth attempt, the power-play unit scored. Vladimir Luka picked out the unmarked Scott McKenzie with a cross-ice pass and McKenzie hammered home past Gospel.

Another power-play chance was converted shortly after. Robert Streetly was serving a hooking penalty and after good play by Goodison, Fin Howells reacted first to scramble the puck past Gospel to increase the lead.

However, Leeds fought back with two quick goals of their own. Brown scored for Leeds on the power play after Silverthorn was given a tripping penalty and then Whistle scored with a shot over Day from close range.

As the buzzer sounded for the end of the period, the referees had finally had enough of the constant complaining from Leeds and awarded Matty Davies a ten-minute misconduct penalty.

Tigers went close early in the third period with Brodie Jesson hitting the post on a breakaway and Day had to react sharply at the other end, saving well from Adam Barnes. Both teams looked dangerous on the break and Leeds were cursing the officials again midway through the period. Brown was called for tripping and such were his protestations that he was awarded a game misconduct penalty for unsporting behaviour and ejected from the game. The sides remained level and with no further goals, overtime was required.

Goodison would prove to be the Tigers’ hero, breaking into the Leeds’ offensive zone, skating in on goal and shooting low towards Gospel with the puck deflecting in off a Leeds’ defender to give Tigers a vital win and deserved two points.

With leaders Swindon losing again to Basingstoke, Tigers closed the gap at the top to 4 points with a game in hand.

After the game Head Coach Tom Watkins, commented, “It was a good win tonight in a very close game. It certainly could have gone either way and I thought both teams worked hard with a number of players missing for both clubs. It was great to get the win in front of a packed house tonight.”