Tigers Win to go Back to the Top 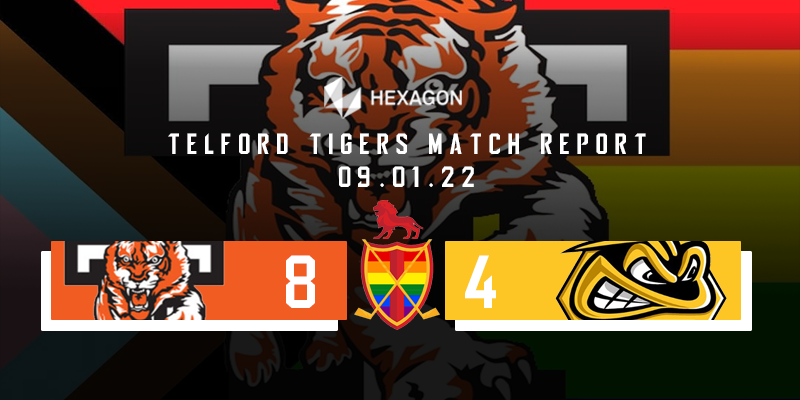 Tigers Win to go Back to the Top. Hexagon Telford Tigers returned to home ice for the second of back to back games against Bees. Tigers had won a hard-fought game in Slough the previous day despite being short benched. Once again, the list of unavailable players was a long one. Andy McKinney served the final game of his suspension and was joined on the sidelines by Ricky Plant, Jack Watkins, Jason Silverthorn and Corey Goodison. Jonathan Weaver was able to return and Head Coach Tom Watkins was added to the roster.

The first period was full of end to end action. Bees opened the scoring in the seventh minute with a power-play goal after Weaver was called for holding. Dominik Gabaj sent Bayley Harewood in on goal and the Bees’ forward scored with a neat finish. Tigers had plenty of shots on Adam Goss in the Bees goal but most were blocked or went wide. Bees then added a second goal. Gabaj again had a hand in the goal sending Adam Rosbottom clear to score. With Tigers heading into the final five minutes of the period behind by two goals, there was a remarkable turnaround.

Gabaj for Bees and Joe Aston were already in the penalty box for cross-checking meaning the teams were playing four-on-four. In the next passage of the play Bees committed two penalty offences. Harvey Stead and James Galazzi were both called for tripping, giving Tigers consecutive power plays. Tigers scored twice in fifteen seconds on the subsequent power plays. Firstly, terrific passing between Vladimir Luka and Scott McKenzie found Jack Hopkins unmarked in front of goal to tap in the shot past Goss. Then, from the restart, Tigers won the puck and Jonathan Weaver controlled the entry to the Bees’ defensive zone and picked out McKenzie who advanced on goal and shot past Goss to draw the sides level. Less than thirty seconds after the sides returned to full strength, Tigers were ahead! With the home team’s next attack, Luka found Hopkins in space and the young Tigers’ forward shot low past Goss to put Telford 3-2 ahead with the three goals being scored thirty-eight seconds apart.

The second period was dominated by Tigers and the home crowd were treated to some quality hockey. Luka deservedly added Tigers’ fourth goal with a shot that he didn’t strike cleanly but the puck looped up over Goss and into the net. Luka then added his second of the night and Tigers’ fifth. Hopkins hit the post with a wrist shot and McKenzie recycled the puck around the goal and found Luka who hammered the puck past Goss. Bees changed their netminder after the goal, with Goss being replaced by Curtis Warburton. Tigers continued to pepper the Bees goal with shots and Nick Oliver hit the post with a slap shot that Warburton could only watch as it went past him. Bees’ reprieve was brief as Tigers added a sixth goal shortly after. Tom Watkins scored with a wrap-around shot that went into the bottom left-hand corner to seal a dominant period.

Bees added a third goal early in the third period with Joshua Smith scoring from close range. Tigers hit back straight away with Hopkins scoring his third goal of the game. McKenzie sent Hopkins clear on goal and his shot went through Warburton and into the net to complete his hat trick. Bees added a fourth goal, with Smith scoring a power-play goal but Tigers would have the final say on the scoresheet. Luka and Hopkins combined to find the unmarked McKenzie who buried a wrist shot in off the bar to seal the victory. The line of McKenzie, Luka and Hopkins combined for a remarkable total of seventeen points in the game.

Tigers’ win was their eighth in a row and that, coupled with Swindon’s defeat in Peterborough, sends Telford back to the top spot in the league.

Following the game Head Coach Tom Watkins, commented, “We keep finding a way to grind out a win which is a big credit to the attitude of the team. I was disappointed to go two behind as I thought we started well but were too aggressive with our up ice pressure. We took full advantage of the power-play opportunity at the end of the first period and turned the game around. It was a big change of momentum and from there we got stronger and played a very good second period. I should make a special mention for Jack Hopkins for scoring a hat trick, he keeps getting better and better every game and is making a difference at both ends of the rink.”

Watkins also commented, “It was a great moment for me and my family this evening.  I played my first game with my son Sam tonight and it is something I’ve been hoping to do since Sam broke into the team. We started the game together on the starting lineup and finished the game killing a penalty together. It is a great memory and very special to play alongside him.”