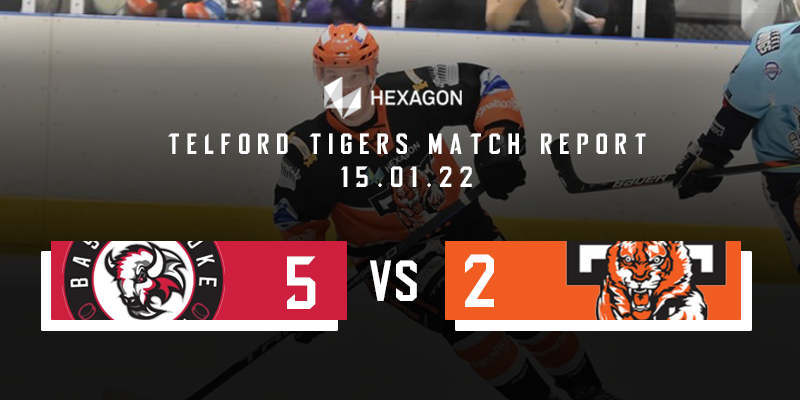 Tigers’ Winning Run Ends. Hexagon Telford Tigers travelled to Basingstoke to take on the Bison. Sitting top of the table and on an eight-game win streak, Tigers were keen to stay there. Tigers were unable to welcome new signing Bayley Harewood to the line-up and also saw Jason Silverthorn, Jack Watkins, Ricky Plant and Corey Goodison out of the roster. However, Andy McKinney returned to the ice after serving his 8 game suspension.

Tigers made a sluggish start to the game and fell behind in the opening half of the first period. Nick Oliver was called for delay of game after an attempted clearance went straight over the glass. Basingstoke took full advantage of the extra attacker with a slap shot from Aidan Doughty, giving Brad Day in the Tigers’ goal no chance. Tigers fell further behind when the Bison added a second goal. Alex Roberts collected a loose puck on the Tigers’ blue line and skated in on goal unopposed and beat Day with a low shot. Late in the period, Tigers hit back with their first goal of the night. Vladimir Luka and Scott McKenzie combined to allow Luka to beat the ex Tigers’ player Jordan Lawday with a shot that went high over Lawday’s glove to get Tigers on the scoreboard.

Telford came out for the second period chasing the game and could not get their passing plays going. Basingstoke extended their lead midway through the period. Roberts scored his second of the game with a tap in after a good set-up play by Zack Milton.

Tigers’ top line of McKenzie, Luka and Jack Hopkins was a threat every time they were on the ice but Lawday was able to repel their efforts. Luka went close twice but Lawday stood firm.

As the period entered the final minute, disaster struck for Telford. Adam Jones sent a shot in on Day and the puck struck the Tigers’ netminder on the shoulder, looped up behind him and fell into the net to hand Basingstoke a 4-1 lead.

Tigers were much better in the third period but Lawday proved to be difficult to beat. As the game entered the final five minutes, Telford were given a power-play chance with Brendan Baird called for tripping. Austin Mitchell King and McKenzie combined to allow Hopkins to drill a superb shot high past Lawday to give Tigers a second goal. Despite some late pressure, and removing Day from the goal for an extra attacker, Tigers could not get back into the game and Doughty sealed the victory for Basingstoke with an empty-net goal.

The defeat sees Tigers drop to second place, level on points with Swindon Wildcats as Swindon hold a better head-to-head record. Although Tigers have two games in hand on their Wiltshire rivals.

After the game Head Coach Tom Watkins commented, “We made a slow start to the game, but if we played the whole game like we did the third period we would have won the game. I didn’t feel we were intense enough or anywhere near competitive enough for two periods and lost a lot of one-on-one battles. That said, we had some decent chances but we didn’t take them. The Basingstoke rink is horrendous, the dressing rooms are disgusting and we had to walk through mud to get to the ice from outside, it is seriously cold and tough to get your game going which contributed to the slow start.  I think we found it hard on the big rink and probably fatigue caught up with us today. I don’t want to be too critical as the team have been unreal these last eight games.”