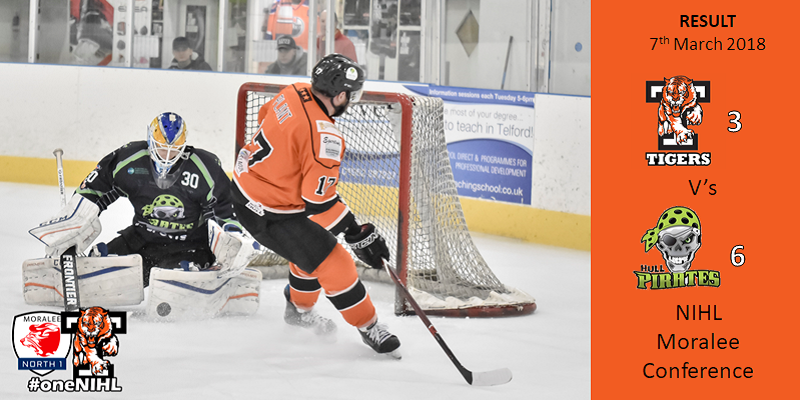 Telford Tigers 1 hosted Hull Pirates on Wednesday night at Telford Ice Rink. The game had been rearranged due to Tigers’ involvement in the National Cup semi final. Tigers title challenge had ended at the weekend with Hull and Sheffield’s victories, meaning Tigers could no longer achieve top spot.  Hull came into the game in second place knowing that a win would take them top and give them the advantage over current leaders Sheffield ahead of their back to back, title deciding games at the weekend.

Tigers were hit with a major blow before the start of the game as captain and top scorer, Jason Silverthorn was unavailable. Also not icing were Dale White, Jordan Stokes, Adam Taylor and Brodie Jesson.

Tigers started the game brightly and after 2 minutes Dan Mitchell almost scored with a neat back handed wrist shot that Hull net minder Adam Long did well to save.  In the 3rd minute Hull took the lead with their first shot on goal, James Chilcott  passing from behind the goal to find the unmarked Sam Towner, who fired home from close range.  In the 8th minute Tigers’ Jonathan Weaver was called for a hooking penalty giving Hull a power play. Just 30 seconds into the man advantage, Bobby Chamberlain tapped in to increase Hull’s lead.  Hull then had two great chances to score, but were denied by Tigers’ net minder Denis Bell, who made a save from a break away and a neat glove save from Jason Hewitt’s shot. Tigers had a number of chances towards the end of the period, with Ricky Plant going closest when his goal bound shot was deflected onto the top of the net.

Hull scored their 3rd goal just two minutes into the 2nd period. Former Tigers’ player Matty Davies back handing the puck in from the right circle. Hull then took full control of the game with goals from James Archer and Lee Bonner to open up a 5-0 lead. Tigers finally got on the score sheet in the 32nd minute, Scott McKenzie’s shot was initially saved by Long but trickled over the line.  Hull hit back almost immediately, with Chamberlain scoring his 2nd goal of the night.  Warren Tait then pulled a second goal back for Tigers, whilst on the power play, Tait scoring from close range after a precise pass from Ricky Plant to cut the lead to 6-2. Tigers’ Macaulay Halford took exception to Chilcott’s check on the buzzer for the end of the period, Halford dropping the gloves and throwing several punches, but Chilcott refused to engage.

Hull started the 3rd period with four minutes of power play time due to Halford’s penalty, but could not add to their score. Plant then had a chance to score with a short handed breakaway, but Long saved his shot with his pads.

Adam Jones reduced the deficit further in the 58th minute with a powerful shot from the blue line that went in off the bar to leave Tigers three goals behind at the end of the game.

Man of the match – Warren Tait

After the game coach Tom Watkins said, “We can’t expect to win when we make that number of errors. We were sloppy at times on and off the puck, which effectively gifted Hull some goals. We didn’t work smart enough and it cost us. Defensively we were weak and kept getting caught with three guys behind the puck which made their transition easy.” Watkins added, “I thought Warren Tait played some huge minutes for us tonight, his desire and commitment was outstanding.”