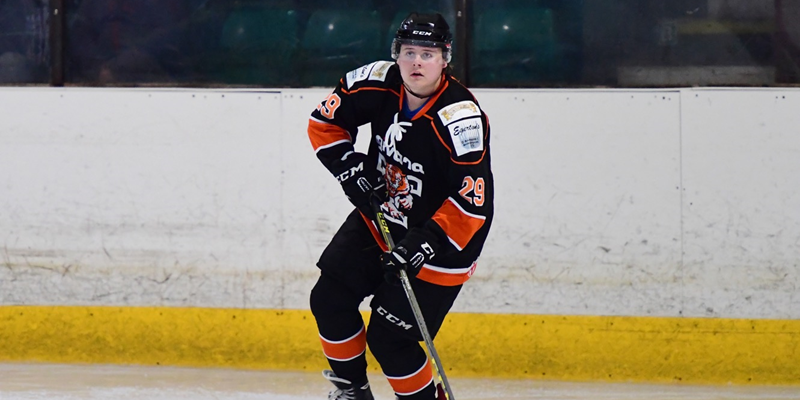 Telford Tigers 1 took a long road trip to Whitley Bay on Sunday night, fresh from their 7-0 victory over Blackburn Hawks on Saturday.

Tigers started the first period slowly and found themselves a goal down within the first 2 minutes with Ryan Sample scoring. Sample then scored his second in the 15th minute to give Whitley Bay a two goal lead heading towards the end of the period. Tigers responded with 2 goals of their own, both on the power play.  Adam Taylor scoring first, followed by Danny Rose with his 2nd goal of the weekend to level the game.

The second period saw the Warriors take the lead again, this time through Shaun Kippin, but Tigers responded with the second goal of the night from Adam Taylor to leave the score tied at 3-3 going into the third period.

The final period belonged to Telford, with Player Coach Tom Watkins giving the Tigers their first lead of the night in the 47th minute with a power play goal. Captain Jason Silverthorn then scored his 4th goal of the weekend to increase the lead to 5-3. The final say went to Taylor who scored an empty net goal to seal the win and his hat trick, giving Tigers a 4 point weekend and maintain top spot in the table.

Man of the match – Jason Silverthorn

After the game Tom Watkins said, “ I am very pleased to come out of this weekend with 4 points, particularly to come from behind tonight and win the third period 3-0 to put the game to bed. Watkins added, “It was a very close game but I think our special teams ultimately was the difference, scoring 3 power play goals and not conceding on our penalty kill. I thought we showed a lot of composure in the third period to seal the points”.