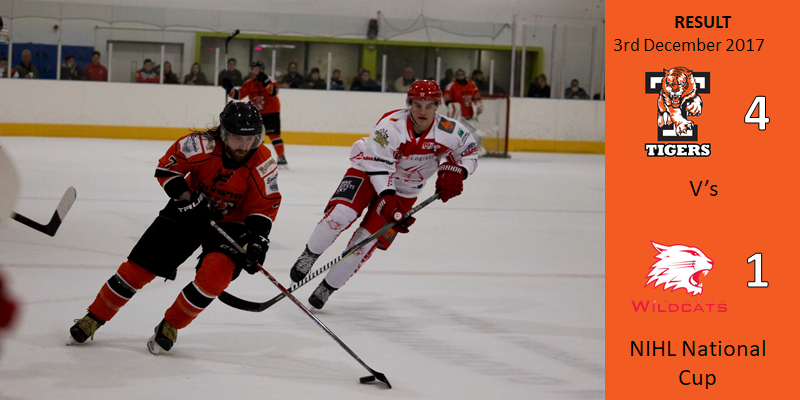 Telford Tigers 1 took on Swindon Wildcats in the NIHL National Cup Group D on Sunday night at Telford Ice Rink.  Tigers had lost the 3 previous games against Swindon in the group stage but were in 2nd place in the table, a point ahead of Basingstoke with a game in hand.

The 1st period was an even one, with Tigers going close on a number of occasions and were unlucky with the puck just not dropping their way in front of goal. Swindon hit the post in the 8th minute and Tigers responded with a couple of long range shots that were deflected wide. It was Swindon who would score the only goal of the period.  Chris Jones was sent clear on a 2 on 1 breakaway and his shot hit Tigers’ net minder Dennis Bell square in the chest and looped over him agonisingly into the net to give the Wildcats a 1-0 lead at the end of the period.

The 2nd period saw Tigers continue to create chances but unable to finish them. Late in the period Scott McKenzie’s wrist shot was saved by Swindon’s net minder Matt Smital and then Swindon had a chance but Bell made a good save to keep Tigers in the game.  In the final minute of the period, Adam Taylor fired over the goal when well placed and Tigers ended the period on top but behind on the scoreboard.

The 3rd period was 5 minutes old when Tigers finally got on the scoresheet. McKenzie tapping home from close range after an excellent passing move with Joe Miller. Tigers then went in front with a power play goal. Miller tipping Warren Tait’s shot passed Smital. Ex-Tigers player Max Birbraer then hit the bar for Swindon after the Tigers defence gifted him a clear shot on goal.

In the 48th minute, McKenzie then scored the goal of the night with a shot from a tight angle which totally wrong footed Smital to give Tigers a 3-1 lead.

Into the last 2 minutes Swindon had a power play and pulled their net minder to have a 6 on 4 player advantage. Bell made a great save and Tigers cleared the puck off the line after a goalmouth scramble. Whilst Swindon were pressing their numerical advantage, Captain Jason Silverthorn managed to break away and back hand the puck into the empty net to give Tigers a 4th goal and seal the victory.

Man of the match – Scott McKenzie.

After the game coach Tom Watkins said, “We were absolutely determined to get something out of this game tonight. None of us are happy with our performances or our record against Swindon this season. I think we started slow but the game really changed after we killed a penalty in the second period. It seemed to galvanise us a group and swung the momentum in our favour.

Watkins added, ”There were some outstanding performances and some big individual moments not least Danny Rose’s shot block late on in the game. We needed to play hard and compete tonight and I think the boys did a great job this evening. A 4-0 third period was huge.

We needed the fans behind us tonight and they got louder as the night went on. We need that every game.”

Telford Tigers 1 are next at home on Sunday 10th December against Bracknell Bees with a 6pm face off. For more details and ticket prices go to www.telfordtigers.net