Tight at the top as Tigers 1 topple league leaders 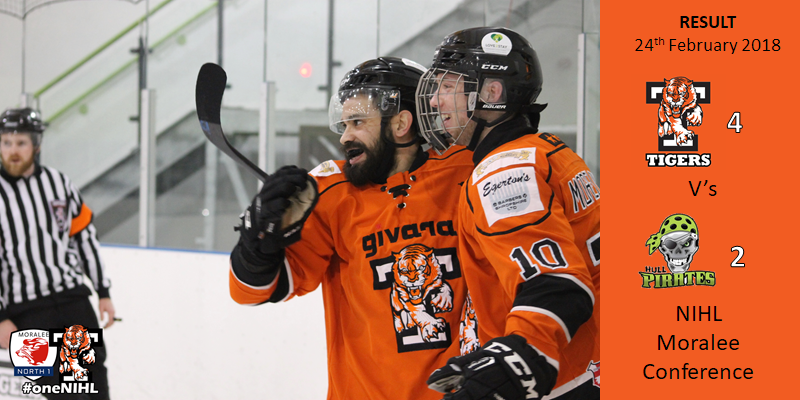 As the season comes down to the last few games, it’s all to play for as Telford Tigers 1 beat the league leaders to ensure that the run in is a nervy affair for all the top three teams fans.

Telford Tigers 1 were looking to keep their slim NIHL Moralee Division title hopes alive on Saturday night at Telford Ice Rink, when they faced off against leaders Hull Pirates. Tigers came into the game four points off the top and, having played a game more than Hull, a win was vital.

The previous weekend had been a disappointing one with Tigers losing 5-1 in Hull and also losing 4-1 at home to fellow title contenders Sheffield Steeldogs. A midweek semi final 2nd leg cup loss to Swindon had capped off a miserable week.

Tigers started strongly and took the lead in the 8th minute when Jed Moreland’s pass left Warren Tait clear in front of goal. Tait made no mistake, sliding the puck in from close range. Dan Mitchell then had a good chance to extend the lead but his shot went straight at Hull net minder Adam Long. Hull took time to get going and were on the back foot for most of the 1st period but took full advantage of a tripping penalty called on Tigers’ defender Adam Jones in the 18th minute. Hull scored just 11 seconds into the power play through Bobby Chamberlain to level the game at the end of the 1st period.

Hull started the 2nd period much stronger and had a number of good chances to score but Tigers’ net minder Denis Bell made two big saves to keep the scores level.

Tigers ended the period ahead with a goal in the 38th minute. Macaulay Halford finishing off a neat passing move between Jason Silverthorn and Ricky Plant.  Halford was left with an empty net to shoot into after Plant’s precise pass.

Hull pushed for an equaliser at the start of the 3rd period and Bell was again called upon to keep Tigers ahead. Bell making a terrific pad save at full stretch to keep Hull out.

Tigers scored their 3rd goal in the 47th minute, Halford scoring his second goal of the night. Scott McKenzie won the puck in a board battle with a Hull defender and threaded a perfect pass across the circles for the unmarked Halford to fire home. Tigers increased the lead further in the 51st minute, when Jonathan Weaver’s shot was saved but Silverthorn scored from the rebound.

Hull continued to press and scored with just 2 minutes of the game left through Jason Hewitt after Tigers’ defence failed to clear the puck. Hull pulled net minder Long for the final minute but Tigers saw the game out to pick up a much needed victory.  With Sheffield winning against Solihull, the league lead changed hands with Sheffield going ahead of Hull, leaving Tigers in third place trailing Sheffield by 3 points.

Man of the Match – Filip Supa.

After the game Coach Tom Watkins said, “I was pleased to get the monkey off our back with a win at home and was very pleased to put a little pressure back on Sheffield and Hull as there are still plenty of games to play”. Watkins added, “We stayed disciplined tonight and played smart on and off the puck, scoring first always helps and it gave us some belief. We’ve played a lot of hockey lately, as have Hull, so the fatigue factor is there for everyone. We had six players missing tonight and several playing with some nasty injuries but I was pleased we got the job done”.