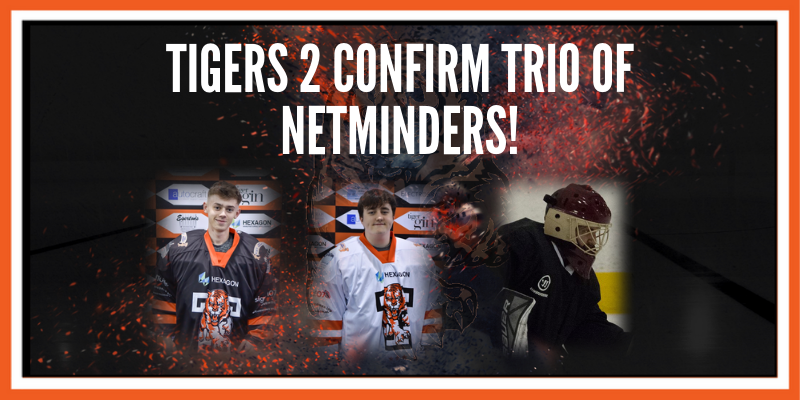 Tigers 2 confirm trio of netminders! Telford Tigers are pleased to announce not only the signing of one netminder, but three; Ryan Lewis, Oliver Johnson and Tigers newbie, Matt Draper.

This season will see the three netminders each get a piece of the ice between the pipes. Two of the three signings are returning players, Ryan Lewis and Oli (Oliver) Johnson. Ryan trained with Tigers 1 for the past couple of seasons whilst icing for the U18s junior squad. Oli has appeared on the junior rosters for several Midlands clubs including Sutton, Solihull and Telford. Last season Oli signed with Tigers 2 gaining valuable experience with a senior squad.

Matt, who last season iced for Shropshire Huskies, isn’t a total stranger to Telford Tigers. A short bench due to injuries for an away fixture against local rivals Solihull Barons last season meant that Draper had the change to step up as back up netminder.

“Lewis has just finished U18s; he trained and backed up Tigers 1 last season and he always works hard to improve himself and others around him.”

“OJ (Johnson) has had a couple years backing up at senior level now. He stepped on a few occasions last season and did a great job.”

“Draper comes from Telford’s rec set up. Despite only playing for a few years, he still shows great promise.”

“I have three young, inexperienced goalies who will all be battling it out to start. I don’t have an out and out number one which I think is good, as they all need to push themselves to earn their spot and help each other out at the start. I also think this will help the team play stronger defence to help our goalies confidence and to all improve over the year”

All three netminder’s own and loan shirts are available to order now for £75 each (Home and Away). Please see the Telford Tigers online shop for more details.