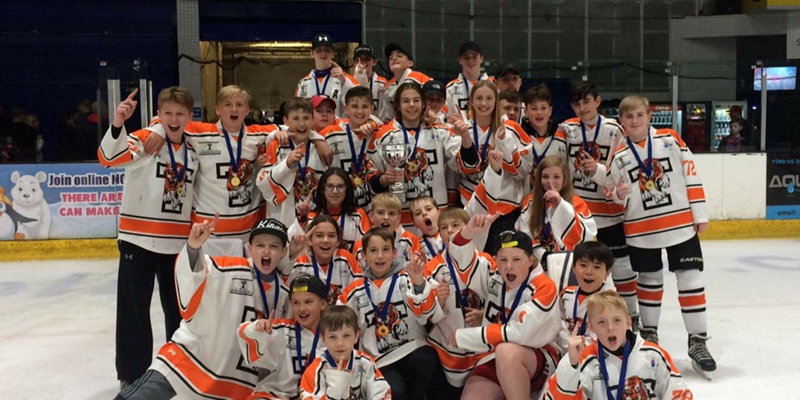 Telford Tigers Juniors at U13 and U15 attended the first ever Godiva Cup weekend on 1st and 2nd July 2017 in Coventry, with both teams representing the club well, showing great effort and determination.

The U13 team lined up against Dundee Stars, Sutton Sting and hosts Coventry Blaze in the group stage. After drawing the opening game with Sutton 1-1 and then beating Coventry 2-0 the team then met a very strong Dundee side, losing 4-0, followed by a 4-2 loss to Sutton, which meant that they would have to beat the rampaging Dundee team in the final group game, if they were to progress to the final. Sadly, it was a step too far but meant that they would play Coventry in the 3rd/4th place game on Sunday afternoon.

In a very close game, Tigers took the lead early on and held a 2-1 lead going into the late stages of the game. Coventry pulled their net minder and with just 2 seconds left on the clock, scored to tie the game and send it to overtime. A tense game was ended when Sandijs Moiks scored with a breakaway goal to give the U13s a deserved victory and 3rd place.

After cruelly losing the final of the Telford tournament to a goal in the last minute, the U15s had high hopes of going one better this time. The group stage featured Dundee Stars, Sutton Sting, an Ireland select team and hosts Coventry Blaze. The team emerged from the group stage with 4 straight wins, qualifying for the semi final against Sutton with ease. The semi final proved to be a close game, with just a single goal sending the team into their second consecutive tournament final.

Coventry awaited in the final and despite going behind to an unlucky deflected goal it was the Tigers that lifted the trophy winning 6-1. A great team effort and congratulations to all involved.

Telford Tigers would like to congratulate all those that took part, all the photo’s from the weekend are available on Flickr

Thank you to Stuart Griffiths for the write up and Paul Everitt for the pictures.