Top of the League for Telford Tigers 2! 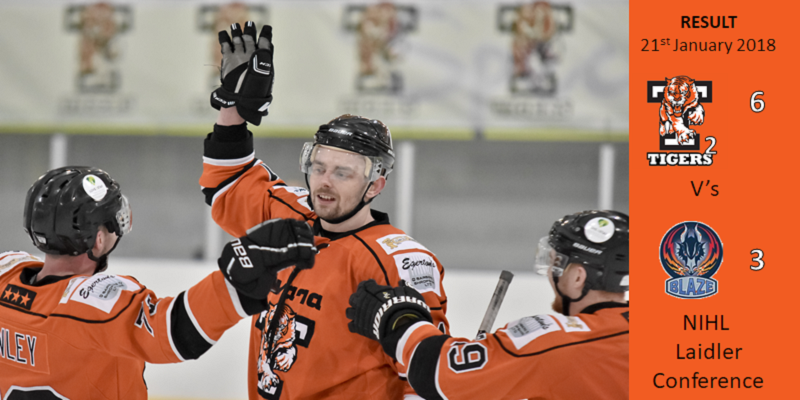 Telford Tigers 2 hosted local rivals Coventry Blaze NIHL this Sunday in their final encounter in their 2017/18 Laidler campaign and a win would see them go tom of the league.

The puck dropped for the first period and it was the visiting team who showed a more solid start, leaving the host team chasing the puck. Despite this, it didn’t take long for Blaze to receive their first penalty of the game with Luke Curtis boarding at 2 minutes 18 seconds.

Tigers didn’t manage to capitalise on the power play and pressed on in hope to get some goals. It was Coventry Blaze who were awarded with the first goal of game, with an even-handed goal from Ryan James at 12:08. Tigers continued to try and create chances in front of the Blaze net but still couldn’t get the puck past Graham Laverick.

Blaze began to put more pressure on the host team and physical action in front of the Blaze net resulted in Tigers D-man Matt Price receiving a holding penalty at 17:00. Blaze took advantage of their power play and found themselves another goal up 18:25. The period ended with 2 goals on the board for Blaze and 0 for Tigers.

The second period was well underway and the Tigers needed to get the ball rolling with some goals. It was #75 Liam Preece who managed to equalise the score line with the Tigers’ first goal of the game at 21:02.

Blaze weren’t backing down yet and responded with their third goal of the game only 2 minutes later with an even-handed goal from Stephen Crowe at 23:34. With the score line looking bleak for the Tigers, they pulled out all the stops to get another goal on the board. A penalty given to Blaze for elbows at 25:02 gave the Tigers yet again another power play. It was a slap shot from player coach Callum Bowley which gave the Tigers their second goal at 26:57.

The puck dropped for the third and final period and Blaze started to feel the strain. At 48:40 the eventual game winner was scored. Tigers’ Captain Karol Jets found #91 Charlie Hammerton at the point on the power play. Tigers went to Hammerton when Charlie fired a laser beam straight into the top right of the Blaze net.

With four goals on the board for the boys in orange and black, the game became more intense with more physical play on both sides. Another penalty for Blaze at 51:16 for elbows found Tigers in another power play position. This time it was #4 Jets who capitalised on the 5 on 4 men play and scored the Tigers’ fifth goal at 52:04. Blaze could feel the heat and 3 minutes later decided to take their time out, in hope that they could win back the game with only 10 minutes to go.

Players from both teams continued to show hard work and determination and a smooth pass from Bowley allowed Hammerton to tap the puck into the Blaze’s net, securing the 6th goal for the Tigers at 58:30.

Less than two minutes later, the sound of the final buzzer went. A tough defeat for local rivals Coventry Blaze NIHL, but a staggering 11th consecutive win for Telford Tigers 2!

With another 4 points weekend the bag, the Telford boys now sit at the top of the Laidler Conference League table. Telford Tigers 2 face their final double header of the month next week and hope to keep adding to the winning streak!

Tigers 2 next home game will be on Saturday 27th January where they will host the Deeside Dragons 2 for the final time this season.