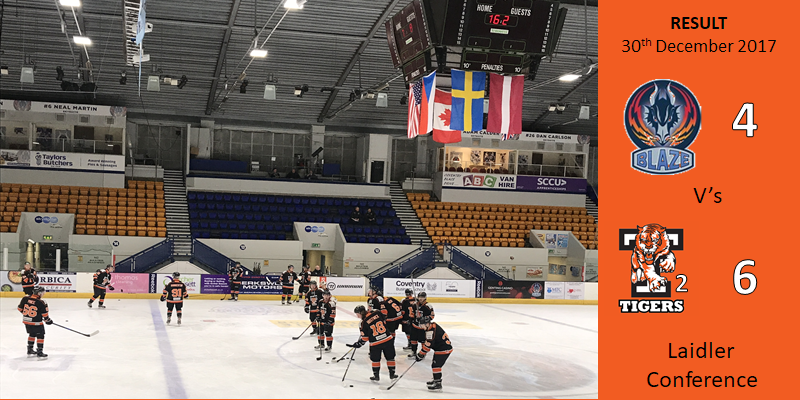 Telford Tigers 2 made December their month and finished the year off with a win against Coventry Blaze NIHL, making Tigers 2 unbeaten in the whole of December!

The first period started with both teams playing at a fast pace and Tigers’ Joe Aston received an interference penalty only 24 seconds into the game. Following this, both teams continued to press on and an early goal for Coventry at 6:06 saw them take the lead. However, it didn’t take long for the Tigers to bounce back and equalise the score line with an even-handed goal from Charlie Hammerton at 7:51, assisted by Price and Hustwick.

Coventry weren’t backing down and were determined to get more goals in the first period! With the half way point of the first period fast approaching, Coventry Blaze NIHL managed to get the puck past Tigers’ net-minder Zack Brown at 9:48, making the score 2-1 to Blaze.

Tigers 2 weren’t down yet, they continued to battle on and showed great determination to get another goal. Less than 5 minutes remained in the first period and at 15:04, Tigers’ Captain Karol Jets shoots the puck straight into the Blaze net! The period ended 2 goals each.

The puck dropped for the second period and yet again, there determination shown from both teams! Things started to become a bit more physical in the second period and Coventry’s Luke Curtis received at 2+10 minute penalty 25:11 for checking from behind. Tigers 2 capitalised on the power-play and a PP goal from Joe Aston at 25:57 saw Tigers 2 creep into the lead!

A Coventry power-play opportunity arose when Tigers’ Connor Keyes received a 2-minute penalty for boarding. The NIHL blaze took advantage and scored their third goal at 32:19, equalising the score line. Tigers 2 came roaring in only 21 seconds later and took the lead with their fourth goal at 32:30, scored again Charlie Hammerton! The period ended 3-4 in Tigers’ favour!

Tigers 2 needed to seal the win in the third and final period, but an even-handed goal at 45:29 from Coventry’s Nash rumbled the Tigers’ chances! With the score line equal yet again, Tigers 2 had to bite back in order to win the game!

With time quickly running out on the clock, both teams were desperate for another goal. With the game into the final 8 minutes, Tigers 2 forward James Smith fires the puck straight into the Blaze net at 52:12! Tigers 2 were in a slim lead but the killer line of forwards, Bowley, Jets and Smith made sure Coventry couldn’t bounce back with Tigers’ Player Coach Bowley scoring at 52:33!

The excitement didn’t stop there! With the score currently at Coventry 4, Tigers 6, Blaze NIHL were doing anything they could to get another goal. With less than 2 minutes on the clock, a scuffle next to the Blaze net saw both teams receive some pretty hefty penalties and Tigers 2 Scott Venus and Blaze’s Robert Perks leave the ice early!

After an entertaining and action packed game, the final buzzer sounded with a roaring cheer from the travelling Tigers fans on what was Tigers’ 6th consecutive win!