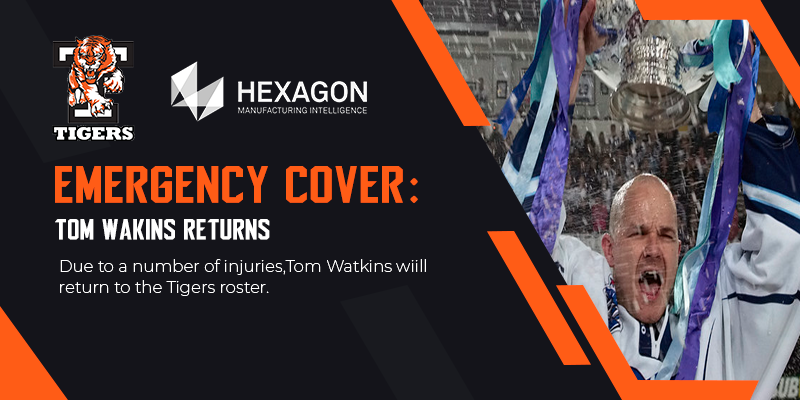 Watkins Back – Again. Hexagon Telford Tigers can confirm that Head Coach and General Manager Tom Watkins will once again pull on the famous Hexagon Telford Tigers kit. Tigers who continue to be without four first-team regulars through injury have also lost the services of regular starters Sam Watkins, Fin Howells and Jack Hopinks to the U20’s World Championships.

Watkins, sponsored by Volvo Cars of Shrewsbury, last iced in 2017/18 averaging over a point a game will wear #25 and will be joined in tonight’s roster with four Tigers 2 players Brandon Anderton, Callum Griffin, Oli Hunt and Ollie Johnson.

Tom Watkins said “With so many players unavailable plus a bunch of guys carrying knocks after a tremendous effort short-staffed last night up in Leeds I’m here to help the team where I can. I’m probably the best-placed person to come in at short notice, I know the systems, I know how I want us to play, know the players, the habits and the roles required. If I can come in and play a solid defensive game, help the PK (Penalty Kill) take a couple of minutes here and there, I’ll do whatever it takes to help the team. I’m normally on the ice four days a week and have practised with the team for the last two weeks so I’m happy to help the players on the ice compete. We’ve also brought up Brandon Anderton who played a strong game last night in Leeds and also today have added Callum Griffin, Oli Hunt And Ollie Johnson to today’s roster against a strong Swindon team.”