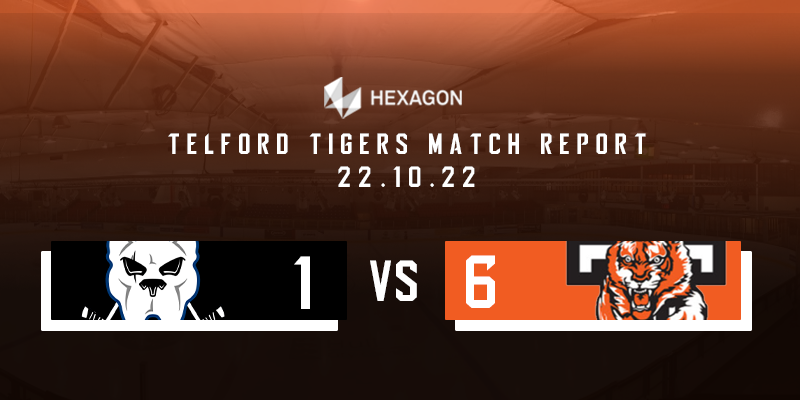 Watkins Bullish after Tigers Win. Hexagon Telford Tigers took their first ever trip to Bristol Ice Rink to take on the Pitbulls, who were playing their first season at national league level.  The first meeting between the two teams in Telford had seen the Tigers win 7-4 and Bristol had won their first match of the season during the previous weekend’s fixtures.

Bristol started the game well and opened the scoring in just the third minute. Owen Sobchak shooting low past Brad Day in the Tigers’ goal.

Telford hit straight back with an equaliser within twenty seconds. Jason Silverthorn with an unassisted goal, shooting over the glove of Bristol netminder Will Kerlin.

The goal settled the visitors down and they dominated the rest of the period. The first penalty of the game was called on Bristol for having too many men on the ice. Tigers took full advantage of the extra attacker, with Vladimir Luka setting up Scott McKenzie to give Telford the lead.  With Bristol unable to cope with Bayley Harewood’s speed it was no surprise that it would be the Tigers’ winger that scored next. Harewood scoring after taking on and beating the Bristol defence and then shooting past Kerlin with an excellent wrist shot.

Early in the second period, Tigers were given a golden opportunity to increase their lead. With Ben Solder already serving a hooking penalty, Ed Bradley was called for tripping, giving Telford a 5-on-3 power play. With the two man advantage, it was a matter of time before Tigers would score and some neat passing saw McKenzie and Silverthorn set up Luka to smash a slap shot past Kerlin who stood no chance of stopping the shot.

Tigers rounded off the second period with a fifth goal that killed the tie as a contest. Harewood scoring a fully deserved second goal after Silverthorn found the unmarked Harewood in front of goal.

The final goal of the the game was scored early in the third period and was another power play goal. Jay Warren was serving a boarding penalty for Bristol, allowing Tigers to seal the game with a goal from Fin Howells.

Man of the match: Bayley Harewood.

After the game Head Coach Tom Watkins, commented, “It was a very accomplished team performance from every player out there tonight. I think we executed perfectly on our penalty kill, we were very solid defensively and efficient on our power play. We were very competitive and smart all over the ice and thoroughly deserved the two points in front of a very noisy and large crowd. I appreciate the travelling support this evening and it was a good feeling to hear them singing so loudly at the end of the game”.