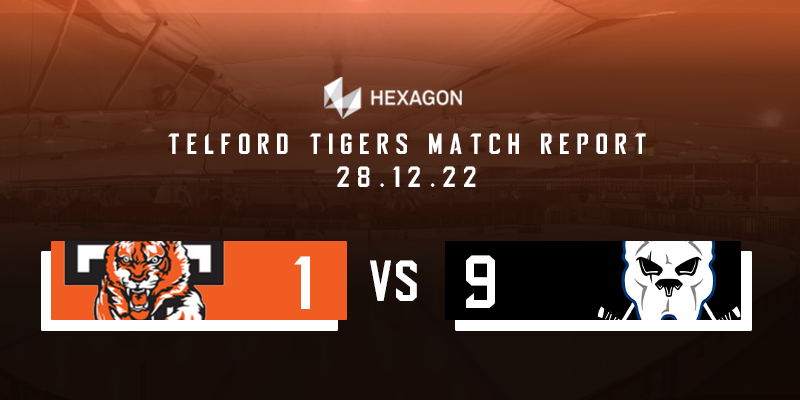 Watkins Embarrassed by Tigers’ Pitiful Display. Hexagon Telford Tigers returned to home ice for the second of back to back games against Bristol Pitbulls. Tigers had broken their recent poor run of form with a much needed victory in Bristol the previous evening and were looking to get a win in front of an almost sell out home crowd.

Jonathan Weaver, Lucas Price and Nick Oliver remained absent from the line up but Charlie Webb and Dan Mitchell were added to the roster.

Tigers made a bright start to the game and in the opening minute of the contest Fin Howells hit a wrist shot that struck the post and bounced away. But despite the early promise, it would be Bristol who opened the scoring. Danny Rose blocked a shot and was clearly hurt and lay prone on the ice. Ben Solder’s shot at goal hit Rose and the puck bounced back to Solder who shot into the net to open the scoring.

Tigers then fell apart defensively as Nick Coric added a second goal and was closely followed by a goal from Josh Shaw to send the home crowd into silence.

Rhodes Mitchell-King was assessed a roughing penalty which gave Bristol a power play they scored on. Former Tigers’ player Bayley Harewood scoring a terrific goal with a shot from between his legs to beat Brad Day and give Bristol a four goal lead.

Deakan Fielder went after Bristol’s Jay Warren but Warren refused to fight and Fielder was given a game penalty and ejected. Bristol gained a seven minute power play to start the second period.

Despite some resolute penalty killing, Tigers conceded again early in the second period. Solder scoring his second of the game and shortly after, Bristol had a sixth. Morgan Clarke-Pizzo scoring with a fierce wrist shot from the right circle. Caly Robertson then added a seventh goal for Bristol with a scrambled effort from close range. Tigers changed net minder with Ryan Lewis replacing Brad Day.

Tigers finally got on the scoreboard with a power play goal. Scott McKenzie and Jason Silverthorn combined to set up Sam Watkins for a shot from close range which beat Will Kerlin low down.

Bristol hit back with a break away goal from Christian Mohr to leave Telford reeling at the end of the second period, 8-1 behind.

The third period was a tepid one with both teams playing out the clock and with Telford wanting the game finished. Bristol had the final say on the scoreboard with a late power play goal from Robertson – Bristol’s fifth power play goal of the evening to end a miserable night for the home crowd.

Man of the match: Ryan Lewis.

After the game Head Coach Tom Watkins, commented, “What an embarrassing, pathetic home performance against a team that we beat in the previous game. We were in front of our biggest home crowd of the season. Bristol skated around us like we weren’t there and our players did nothing about it for 60 minutes. That just might be one of the poorest performances I’ve seen in my tenure as coach. We had zero grit, zero energy and were defensively inept. We couldn’t sustain any offensive pressure or protect the puck and we gave up odd man rush after odd man rush and one pass would beat all three forwards out of the offensive zone, our defense got beaten one on one every time. I could go on and on.”