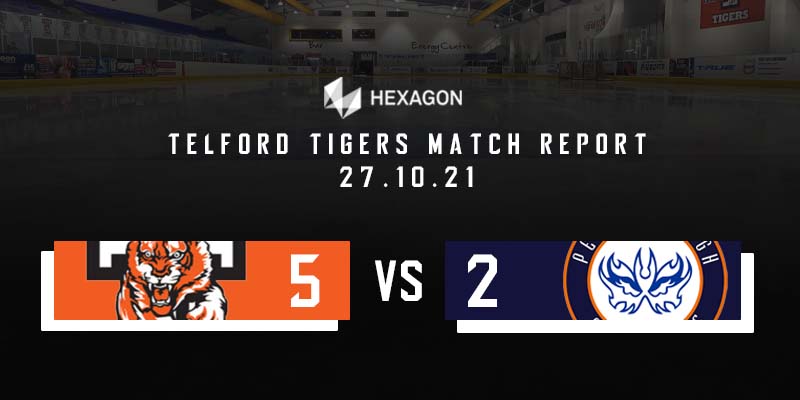 Watkins Fires Tigers to Victory. Hexagon Telford Tigers took to home ice in a midweek game against Peterborough Phantoms in the National Division. Tigers came into the game off the back of their first league win of the season and best performance so far, after beating Basingstoke Bison at the weekend.

Tigers were still without Jonathan Weaver and Scott McKenzie but were able to add Andy McKinney to the lineup after the Tigers’ forward missed the previous two games.

Tigers started well and opened the scoring in the 3rd minute. Tigers’ captain Jason Silverthorn pounced on a defensive turnover in the Peterborough zone and skated in on goal before backhanding the puck past Ryan Bainborough in the Peterborough goal. Tigers’ lead didn’t last long though as the Phantoms hit straight back to equalise. Thomas McKinnon lost the puck on the Phantoms’ blue line and Morgan Clarke-Pizzo skated the puck towards the Tigers’ goal unchallenged and hit a wrist shot off the post and into the net before Brad Day could react.

Tigers reacted positively to losing the lead and were ahead again midway through the period. McKinney showed great determination to win the puck behind the Phantoms goal and sent the puck in front to Fin Howells whose first-time shot went in off the post. Less than 30 seconds later Tigers scored the third goal. Jack Hopkins took possession of the puck in the right circle and sent a pass across the ice to the onrushing Sam Watkins, who struck a wrist shot high to Bainborough’s left to put Tigers in control of the game. Shortly after the lead was extended further. Hopkins once again showed poise on the puck to wait for a Tigers’ player to become free and picked out Jack Watkins who was speeding towards goal. Watkins received the puck and smashed it past Bainborough for Tigers’ fourth goal. Telford ended a dominant period 4-1 ahead and were firmly in control of the game.

Peterborough were a much-improved team in the second period and were proving harder to break down. Ross Clarke went close twice, with Day making a double save. Clarke-Pizzo always seemed involved in Phantoms best-attacking play, using his speed to create chances. The period ended without further scoring, leaving Telford with a period left to close out the game

Tigers maintained their lead until midway through the period when Peterborough were handed a 5-on-3 power play. Silverthorn was already in the penalty box for holding when McKinney was awarded a boarding penalty. The Phantoms took just five seconds of the two-man advantage to score. Ales Padalek won a face-off and sent the puck across to Tom Norton who shot in off the post to reduce Tigers’ lead. With time running out Tigers scored the final goal of the contest to finish off any Peterborough hopes of a comeback. Jack Watkins took and won a face-off in the Phantoms’ defensive zone and despite being down on one knee, still managed to fire the puck at the goal with enough power to catch out Bainborough and beat him low down to seal a deserved win for Tigers.

After the game Head Coach Tom Watkins, commented, “We got the result we wanted tonight, after a strong first period.  We took our chances well with some great finishing and spread the scoring through the lineup as well which is always positive.

The final two periods were very close, Peterborough never quit and they always kept attacking and I never felt we were in full control of the game despite the three-goal advantage we had. They chipped away at us and kept creating chances. I was relieved when Jack restored our three-goal advantage with 3 or 4 minutes to go.”