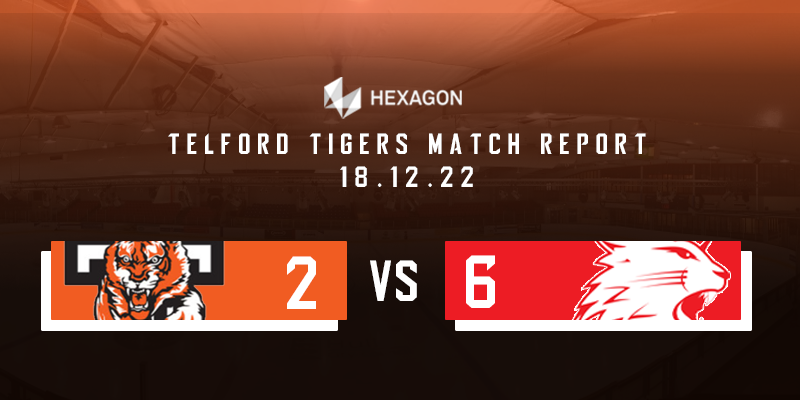 Watkins Questions Team After Latest Defeat. Hexagon Telford Tigers returned to home ice after an eighth consecutive loss on Saturday night against Sheffield Steeldogs.  Jason Silverthorn was unable to ice and joined Jonathan Weaver on the side lines but Rhodes Mitchell-King and Sam Watkins returned to the line up.

With confidence low, Tigers needed a strong first period and early on they were indebted to netminder Brad Day who kept them in the game. Day made a superb double save early on when Swindon were on a power play. Day then made a brilliant block with his pads from an Aaron Nell break away.

Swindon were given a power play after a dubious interference call on Nick Oliver. Tigers have had very little luck of late and it deserted them again on the penalty kill. Danny Rose lost his stick by the goal and Day was not aware of this so left the puck for Rose to play. Swindon capitalised and cycled the puck to Colby Tower who scored from close range.

Worse followed within a minute. Fin Howells lost possession on the Swindon blue line, allowing Tomasz Malasinski a break away which he scored on with a low shot past Day.  Balint Pakozdi for Swindon then hit the cross bar and Day denied Nell once again on a break away chance.

Late in the period an unnecessary tripping call was given against Howells, gifting the Wildcats another power play. Swindon punished Tigers again with Nell shooting in from the left circle after a good set up from Chris Jones. The goal left the Tigers’ fans silent as the team headed into the break three goals behind and in disarray.

Within the opening two minutes of the second period the game was over as a contest. Sam Godfrey scored a fourth goal for Swindon within thirty seconds of the restart, shooting into an open net from the right circle.  A minute later Jones added a fifth goal, scoring with ease from the slot with the Telford defence stood watching.

A chance fell to Sam Watkins but he shot over from in front of the goal and Swindon scored a sixth goal late in the period. Russell Cowley scrambling the puck in from in the crease after Day had saved an initial shot.

The third period saw Swindon take their foot of the gas a little and Telford managed two consolation goals. First  Howells shot from the slot and beat the screened Marr. Then a Vladimir Luka slap shot was tipped in brilliantly by Sam Watkins who was stood in front of the Swindon net minder.

The game petered out and Tigers lost a ninth consecutive game and head into the Xmas break with confidence low.

Tigers face crucial back to back games against Bristol Pitbulls in their next two fixtures.

After the game Head Coach Tom Watkins, commented, “When are we going to learn? We make the same mistakes over and over again, making bad decisions under pressure, turning numerous pucks over at the blue line, odd man rush after odd man rush, giving up four breakaways in the first period alone. Frustratingly as a team, we have no teeth, we are soft to roll over and we don’t have the mental toughness to make a difference to make a play or to stand up when it is needed. We constantly overplay, don’t play with simple structure on the defensive side of the puck. As a team, do we have the character throughout the room for the challenge? I don’t know.”