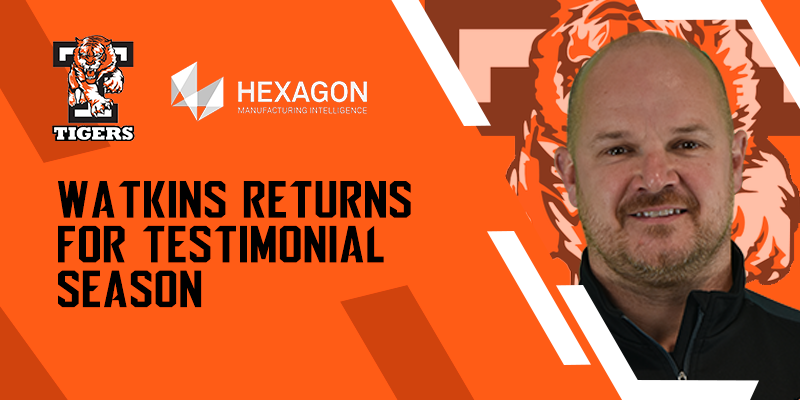 Tom will be celebrating his testimonial season with a series of special events during the season and he will once again be popping on the pads and gloves for a testimonial game in 2023.

The 44-year-old, originally made his debut for Telford pulling on a Tigers shirt in 1996, playing three seasons for the club, before re-signing for the Tigers in the 2010/11 season as Player/Head Coach.

Tom has made 289 competitive appearances and has coached the Telford Tigers in close to 750 games as the club’s Head Coach. Watkins is the Tigers’ most successful coach in the club’s history, winning four league championships, two cups & a North Playoff during his spell in charge. Watkins will lead the club in the defence of the NIHL National League for the forthcoming season.

Watkins commented, “Firstly, I’m delighted to return for another season In Telford, probably no surprise to anyone. I’m very happy here and feel I have the respect and support of Mike to shape the team and club in the best way I can. At the National League level, we go into the season as back-to-back League Champions but I’m sure it will be a very difficult challenge to make it a three-peat in such a competitive league. The new season will also see our Laidler league team head into the new season as current League Champions. I don’t think there is a greater challenge than trying to retain a trophy at any level of any sport, you must maintain that hunger, desire, and consistency but the first job is to recruit wisely. You simply can’t win without good players but I’m confident we will once again have a very exciting, talented roster that will be as keen as I am to be competitive in every competition.

I’m honoured and very grateful to be awarded a Testimonial Season here in Telford and I’m very excited to kick it all off. This will be my 16th season overall in Telford, having arrived here after the closure of the Ice Rink in Durham, as a young 18-year-old and can still remember heading along the M54 for the first time and seeing the Wrekin, somewhere I now spend most of my free time, walking and biking. At that point, I certainly didn’t expect to have settled, married, and raised my two children here some 26 years later. I guess things happen for a reason, Telford is my home, I’ve made some fantastic memories here, have lots of very good friends and feel very lucky to have a wonderful wife and two beautiful children.

When I arrived here as a player/coach in 2010 after 10 very successful seasons with the Coventry Blaze, I didn’t realise it at the time, but I took a huge risk making that move. The club at that point isn’t what it is today, we had nothing and if it wasn’t for the grit, determination, and resilience of several people it wouldn’t have survived. I can’t stress how hard it was. It was in those first 3 or 4 seasons that I really learnt how difficult it was to be a professional coach, I was learning on the job every day, and I made plenty of mistakes, but it was certainly that time that shaped me as a coach and a person. It taught me to be resilient and stay upbeat despite having a losing team for those first 4 years.

Fast forward to where we are now, this is the most successful era in the Tigers’ thirty-seven (37) year history having won four (4) league titles in six seasons, multiple cups etc, the Tigers are the most successful team at this level of hockey over that period. We have all worked so hard to build a club that people can be proud of, want to be part of and which is at the heart of the local community.

As much as I’m being honoured with a Testimonial Season, this honour wouldn’t be possible without the support and backing of a huge number of people. I’m very grateful to everyone that has made it possible for me to have the opportunity to follow a career in the sport I grew up playing as a youngster in Durham alongside my brothers, being followed around the country by my little sister, and the sacrifices and support of my parents who allowed me and encouraged me to follow my dreams. It’s for sure a long story but there are loads of fantastic memories, no doubt hundreds of players I’ve played alongside or coached in my Tigers career and can’t thank them enough for their dedication, commitment and backing me. It’s not easy being a player at this level and I tip my hat to every guy that has pulled on a Tigers shirt alongside me or has played for me.

Lastly, I must say a huge thank you to my lovely wife Clare, she has sacrificed more than anyone for me to do what I love, I’m forever in her debt and my two beautiful children Sam & Katie, truly are an inspiration to me, both extremely talented and make me proud beyond words every day. I love you guys.”

Owner of Telford Tigers, Mike Washburn, commented, “I am delighted to see the return of Tom Watkins as both the General Manager and Head Coach of Telford Tigers – we have worked together for many years and have known each other even longer.

I have no doubt in Tom’s unique ability as a Head Coach to be able to forge a roster that is capable of winning titles, leagues, and competitions – this is a matter of fact. The challenge now is to move the Telford Tigers on-ice product up yet another level. I’m excited at the ideas and energy Tom has, to develop our Ice Hockey teams to that next level – and I look forward to seeing this unfold over the coming months.

We also want to significantly improve our Ice Hockey club and all our off-ice products – in short, to deliver the best possible experience for anyone who touches Telford Tigers in any way. As returning GM Tom has a pivotal role in helping to both shape and achieve these objectives. We have come a long way over the last 5 years and now is the time for Telford Tigers to surge forwards again.  As Chairman I fully back and support Tom with this work, and relish building an Ice Hockey community of the highest order and fit for the future. In short, a returning GM and Head Coach with an unquestionable track record and desire to succeed – great to have you back Tom!

To mark Tom’s coming season, we have decided to make it a Testimonial year. There will be lots to get involved with and an opportunity to make the forthcoming campaign a memorable one for him. For sure there are few if any other players and Coaches who have given so much loyal service over such a long period of time to 1 club! We are lucky that the club is Telford Tigers. Work is already underway so let’s bring on the new season!”

Tom will once again be joined on the bench for the 2022/23 season by Assistant Coaches Barry Holyhead and Karl Creamer. Both coaches were part of the backroom staff during the league-winning triumph last season and their return gives Tom a wealth of experience to call on as the Tigers head into the forthcoming season.

Tigers would like to thank Volvo Cars of Shrewsbury for being Tom’s personal sponsor again for the 2022/23 season.