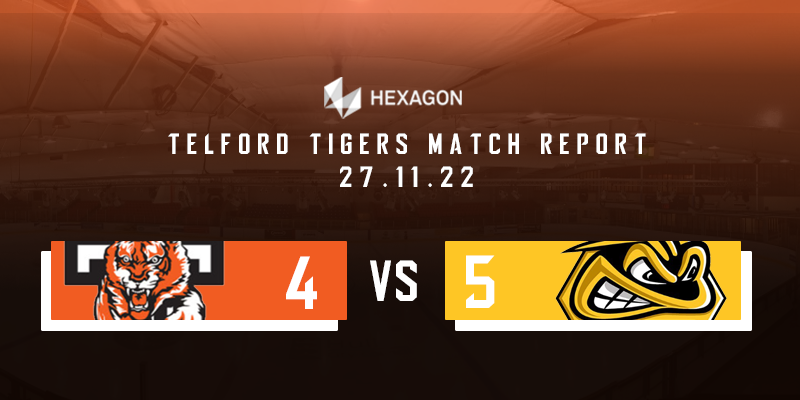 Telford were still without Jonathan Weaver, Scott McKenzie and Deakan Fielder but were able to add Charlie Webb from the Laidler Division squad to bolster the line up.

Tigers made the worst possible start to the game by conceding a goal with the first shot on target from a Bees player.  A breakdown in play in the Tigers’ defensive zone allowed Alan Lack to find the unmarked Will Stead who shot over Brad Day to open the scoring.

Tigers hit back with five minutes of the first period remaining. A shot from the blue line hit a Bees’ defender in front of the goal and the puck bobbled in the air and was forced home from off the shaft of his stick by Webb, who scored his first ever National League goal on his first shift of the game.

Tigers would go to the break behind after conceding a goal in the last minute of the period. With Corey Goodison serving a tripping penalty Bees’ power play unit restored their lead. Harvey Stead sent a pass low down for Brendan Walkom to shot over Day into the net.

Tigers were much better in the second period and soon equalised. Sam Watkins scoring with a shot from the right circle that beat Adam Goss to his left. Telford then gained their first lead of the game with a breakaway goal. Nick Oliver sent Vladimir Luka clear on goal and Luka backhanded the puck over Goss to put Tigers ahead.

Late in the period, Bees equalised. Tigers were left cursing their luck when an attempted clearance around the boards struck referee Jarvie on the leg, allowing Will Stead to pass across goal to Lewis English who shot past Brad Day to draw the sides level.

Early in the third period, Walkom scored his second goal of the game for Bees but Tigers hit back with a well worked move between Fin Howells and Jason Silverthorn which ended with Silverthorn hitting a shot in off the post for Tigers’ fourth goal.

The game turned on a controversial moment as the game entered the final five minutes. Silverthorn was assessed a match penalty for a check to the head on Goss with the Tigers’ captain bemused by the award of the penalty which saw him ejected from the game. On the subsequent five minute power play Stuart Mogg scored what would prove to be the game winner with a long range shot that beat the screened Day.

After the rest of the penalty was killed, Bees maintained possession and ran down the clock to send Telford to a second defeat of the weekend.

After the game Head Coach Tom Watkins commented, “It was a disappointing result. I thought we were sloppy through the first period but in the second period we were pretty much camped in the Bees’ zone. That period ends tied as we were guilty of not taking chances, executing on the power play and weren’t clinical or didn’t get our heads up around the front of the net for a better option. Of course when luck is not going your way the puck hits an official and lands on a Bees’ players stick and it’s in the back of the net three seconds later. Unfortunately that is one of those things that you have to accept, get your head up and work harder.

It was much of the same in the third period, lots of possession and opportunities and you could argue a goal for us was coming but the game changed with the match penalty on Jason Silverthorn. I didn’t see what happened at the time but I have seen the video of it and I don’t believe it is a match penalty. It’s a two minute minor penalty for goalie interference and we will send in an appeal and hopefully get it overturned. It definitely changes the game for sure.”