Watkins Unhappy with Officials as Tigers Hit For Six 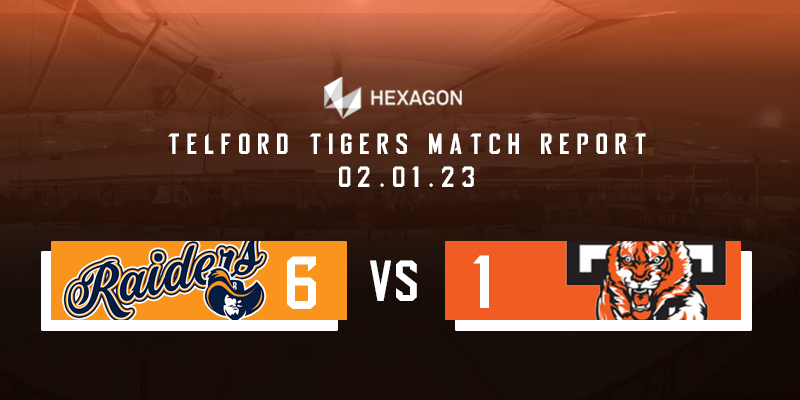 Watkins Unhappy with Officials as Tigers Hit For Six. Hexagon Telford Tigers travelled to Romford for their first game of 2023. Tigers were in a poor run of form – having lost ten of their last eleven games and were beaten heavily in their last game.

Tigers were short of defenseman with Jonathan Weaver, Deakan Fielder, Nick Oliver and Corey Goodison all absent from the line up.  Charlie Webb was added to the roster

An even first period saw only one goal, with the hosts taking the lead in the final five minutes of the period. Raiders Captain Aaron Connolly scoring off a pass from Matt Gomercic.

Tigers hit back early in the second period with Vladimir Luka setting up Fin Howells who sent a wrist shot low past Raiders net minder Ethan James. But Raiders were back ahead less than a minute later after some lax defending saw Alex Roberts score.

Tigers had to kill off an extended 5-on-3 power play after Rhodes Mitchell-King and Sam Watkins were given penalties. Some resolute defending kept the Raiders power play scoreless.

Tigers started the third period in the worst possible way, conceding after two minutes – Connolly scoring his second of the game to give Telford a mountain to climb. Defensively Telford fell apart once again as a procession of Tigers players were sent to the penalty box. Brodie Jesson and Jason Silverthorn were serving penalties when Raiders added a fourth goal through Roberts’ second of the game.  Howells was then called for tripping and Raiders scored again, Thomas Relf with the power play goal.

Roberts finished the game with a third goal and a sixth goal for Raiders sending Tigers to another disappointing defeat.

After the game Head Coach Tom Watkins, commented, “I was really pleased with how we played the first period. We worked smartly, moved the puck well and executed our game at both ends of the rink. After that a good, close game was very much decided by the officials. For two periods we killed penalties, every call made tonight bar one was one way. We weren’t dirty, we didn’t do anything that Raiders didn’t do but we were the only team punished. We got into the third period with only one goal in it but got hit with penalty after penalty. Our penalty kill was rock solid for two periods but with the short bench we have right now there is no way we could sustain that for another period. Three times tonight we had to play shorthanded with two players in the penalty box and that hasn’t happened all season until this game!”