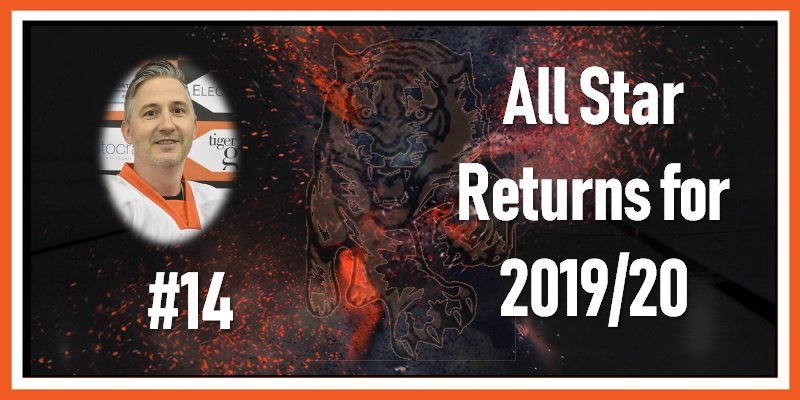 Weaver Makes Tigers Return. Telford Tigers are delighted to announce the return of former Great Britain defenseman Jonathan Weaver for the 2019/20 season. Weaver joins club captain Jason Silverthorn in returning for his sixth season with the club. Weaver will once again wear the number 14 shirt.

Weaver was voted into the NIHL All Star team last season as well as scooping the Telford Tigers 1 Players Player and Coaches Player at the recent Presentation Evening, has been a key player in all of Tigers’ recent successful teams. Weaver scored a remarkable 60 points last season, a total that saw him lead the league in points by a defenseman.

Jonathan commented, “It is great to be back with the Tigers for the 2019/20 season and what will be my sixth year with the club. I have been part of some trophy winning teams during that period and am looking forward to competing for silverware again next season.”

Tom Watkins, Head Coach and General Manager, said, “Weaves is one of the best British players of all time and he is still consistently one of the best players on the ice every game. He brings so much to the team with his experience, know-how and all round competitive nature, he is an example to all the younger players as to what it takes to succeed. Any team in this league would love to have Jonathan and we are lucky to have him.”

Weaver’s #14 own and loan shirts are available to order now for £100 each (Home and Away). Please see the Tigers’ Online Shop for details.

In the 2019/20 season, Tigers are again offering individual player sponsorship at £400. The package will include a personalised ‘SPECIAL’ exclusive third jersey with a company name or family name patch, announcements on match nights, a small advert or logo in the match night programmes and a signed player photo. The jersey will be worn for cup games and play-off games and will not be available as a replica.

If you are interested or require more information on the individual player sponsorships, contact marketing@telfordtigers.net.
Watch out for further details about new signings at Telford Tigers, visit: https://www.telfordtigers.net/news or catch up on Facebook or Twitter