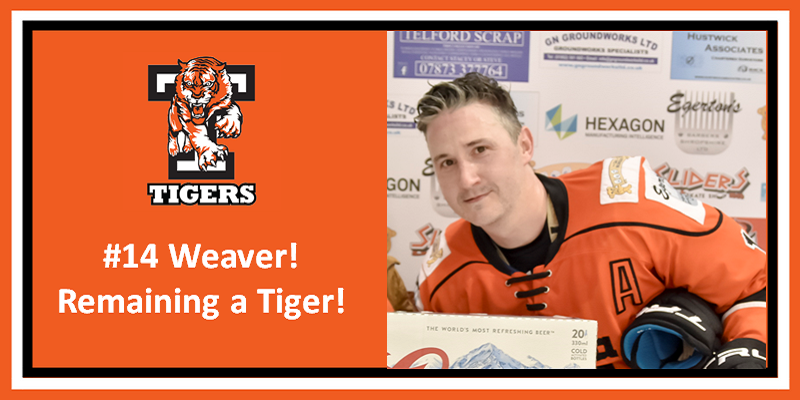 Telford Tigers 1 are delighted to announce the signing of Jonathan Weaver for the forthcoming season. Weaver returns for his 5th season with the Tigers, having scored the most points for a defenceman in the NIHL North last season (45), whilst adding the NIHL North Playoff Championship to his haul of trophies with the Tigers. Weaver was part of the Tigers team when they won the double of EPL League and Cup in 2015 and was also part of the EPL Championship team in 2017. Weaver will play next season in his trademark number 14 jersey and also wear the “A” on his shirt as an Assistant Captain.

General Manager and Head Coach Tom Watkins said, “Jonathan is simply one of the best players of his generation, one of the top British players of all time and I hope the fans in Telford appreciate having been able to watch him play for the four previous seasons he has been in Telford. He is the most complete player I have had the pleasure of playing alongside and coaching, he is so naturally talented, so smooth on the puck, can really make things happen and thinks the game way ahead of most. He has desire to win, sacrifices his body to block shots and plays hurt. Jonathan is just a real hockey player, irreplaceable in my book and makes us a better team on so many levels.”

Jonathan Weaver commented, “It’s great to back for my 5th year with the Tigers, we’ve got a competitive team and we will do all we can to challenge for silverware.”

Jonathan’s own and loan shirts are available to order now for £100 each (Home and Away). Please see the own and loan registration page for more details and to register.