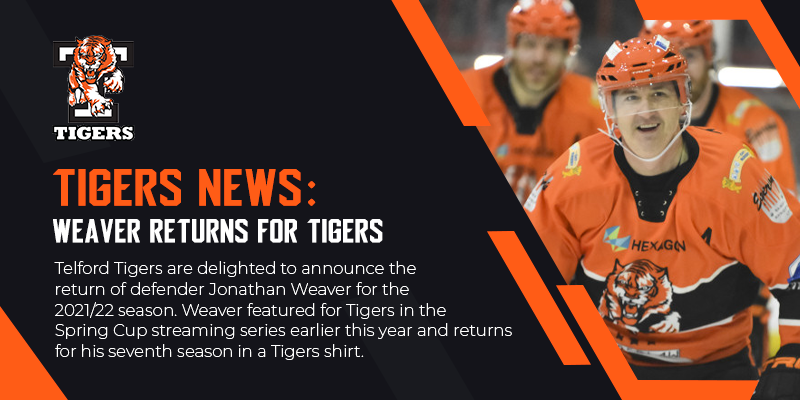 Weaver Returns. Telford Tigers are delighted to announce the return of defender Jonathan Weaver for the 2021/22 season. Weaver featured for Tigers in the Spring Cup streaming series earlier this year and returns for his seventh season in a Tigers shirt. After an injury-hit 2019/20 season, Weaver made a comeback late in the season helping the team to win the league and cup titles.

Weaver stated, “I am really pleased to be returning for the forthcoming season. Being injured for large parts of the last season we played was difficult and then not being able to play for almost 12 months has been tough but it has put a lot of things into perspective. I still enjoy playing and when you have a coach like Tom to play for and the team we have, it is an easy decision to come back to play for Telford. I know Tom will put together a strong roster that will compete for all the silverware next season.”

Tom Watkins, Head Coach and General Manager, said, “Weaves is one of the best British players of all time. He really enjoyed playing in the Spring Cup, raised his game for the higher level and showed exactly what he is capable of.  For a guy who loves to play, to miss as much hockey as he did during the 2019/20 season was tough for him.  Jonathan has so much ability and to return to the ice after such a long period on the sidelines, to step up and contribute the way he did on his return in the Cup Final was fantastic for him personally. The team, the players were so pleased for him at that moment as we all knew how difficult that period had been for him. He brings so much to the team with his experience, know-how and all-around competitive nature, he is an example to all the younger players as to what it takes to succeed, just having him on the bench for the run-in gave us a big lift and helped the D-core immensely. We are very lucky to have been able to enjoy watching Jonathan play in a Tigers shirt over the last 6 years, any team in this league would love to have him. I’m delighted to have him on the roster once more.

Telford Tigers would like to thank Integrated Electrical for agreeing to be Jonathan’s personal sponsor for the forthcoming season.

Jon’s own and loan shirts are available to order now for £100 each (Home and Away). Please see the Tigers’ Online Shop for details.