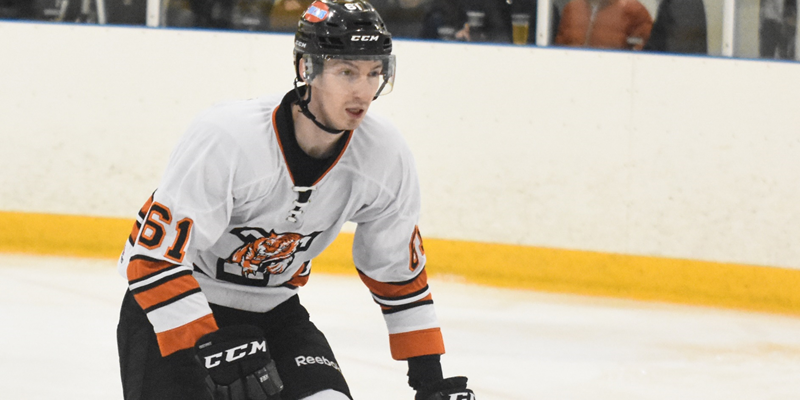 Telford Tigers are delighted to confirm the return of 23 year old forward Adam Taylor for the upcoming season. Taylor, who signs on for his eighth season with the Tigers, is arguably one of the best home grown talents to progress through the Telford junior hockey system to date, having iced for the Rockets, Venom, Trojans and Titans as well as the Tigers. Talking about signing up with the Tigers again, the two time league winner commented ‘It’s good to be back with the Tigers, I have played in Telford my whole life. This will be my eighth year putting on the shirt and it’s still a pleasure every time I step on the ice to represent this town. The Tigers fans are great and they have stuck with us through the ups and downs over the years, they create an atmosphere which is always fun to play in. It’s going to be a tough season, but I’m looking forward to being part of the team that Tom is putting together and competing for another title.’
Tigers coach and General Manager Tom Watkins was clearly happy adding the experienced Taylor to the Tigers roster, saying ‘Adam Taylor is a very underrated player in my view, he is a consistent performer, a guy who can play in many situations and who has been part of my Tigers teams for the past 7 seasons. He knows the way my teams play; can play within the structure that we require. With over 250 EPL games under his belt, he will bring a lot of experience to the roster and I expect him to make a big impact with his speed on and off the puck, creating space for others and turning pucks over on the fore check.’ Watkins added ‘He is another player local to the area and made an instant decision to come back when we spoke. I expect him to add more offence to his game this season and prove a genuine goal threat.’

previousCorey G is back…….
nextKarol Jets and Simon Harrison sign on with Telford Tigers 2