Widnes Wild get their revenge on Hexagon Telford Tigers 2 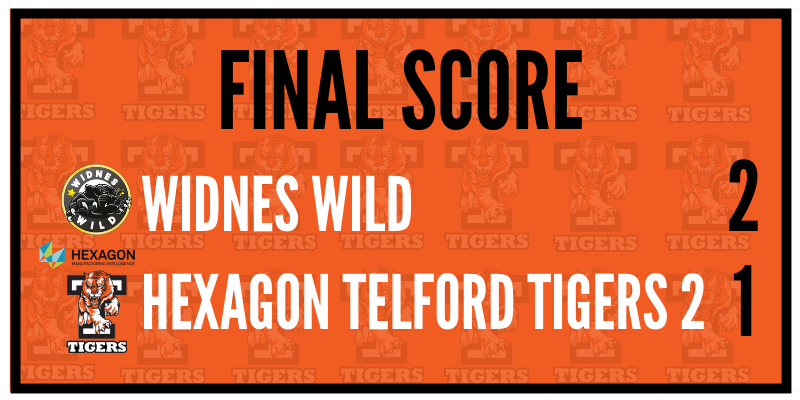 On Sunday 21st October Telford Tigers 2 travelled to Widnes for the second game against them this season. The first game at Telford was a hard-fought nail biting game resulting in a win for the Tigers Team and a shut out for #41 Zac Brown.

This game proved to be just as hard fought, end to end hockey throughout the game. The Tigers were dominant in the first period but were unable to take advantage of the early power plays. The Widnes Goalie seemed to struggle with the new rules regarding releasing the puck, which earned him a delay of game penalty a minute into the game.

When the Wild had the opportunity, they scored on a power play after #94 James Smith found himself on the end of the boarding penalty with a two plus ten. The period ended with the Wild one nil up.

The second period saw the Wild take rough shots at the heads of both of the cages on the ice, after both were uncalled, #11 Brandon Anderton had a few words which resulted in roughing penalties for both sides. The period saw both sides score in what was now a nail biting game that both sides clearly wanted to win. Tigers #96 Charlie Hammerton finding the back of the net for the Tigers for the only goal of the game.

The third period saw end to end hockey, with the Wild tiring the Tigers kept up the pressure and with 45 seconds to go called #41 Zac Brown out of the goal and tried hard to get an equalising goal with 6 skaters. The Wild missed an open net and the Tigers were unlucky to finish one goal down. Both Goalies were awarded Man of the Match for the second time. The third game when these two teams meet promises to interesting.

Coach Callum Bowley has this to say about his teams performance today;

“I couldn’t fault the effort levels of the guys against Widnes, they dug deep, did what was asked of them and we were very unfortunate not to come away with more. We just made two simple mistakes and that’s what cost us. There were a lot of positives that we have to take from the game, so we’ll go into this weekend with a completely fresh mindset and with confidence that we can get back on track”.

Hexagon Telford Tigers 2 are back in action this weekend for another doubleheader weekend! First they will take a trip to East Yorkshire where they’ll face Hull on Saturday before being hosts to the East Yorkshire side Bradford Bulldogs on Sunday at Telford Ice Rink.