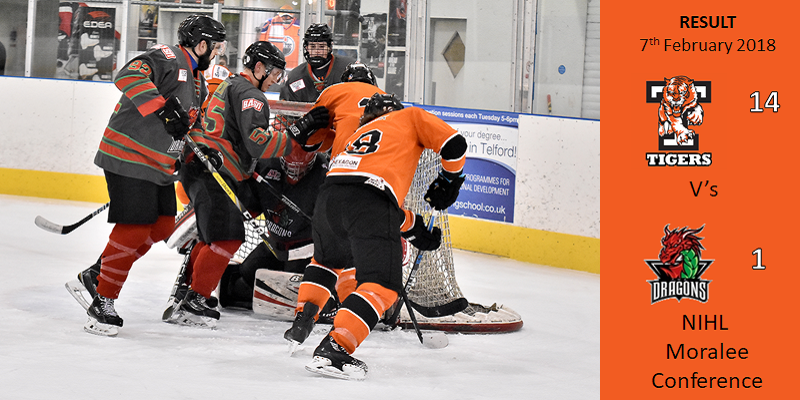 Telford Tigers 1 faced off against bottom of the table Deeside Dragons on Wednesday night at Telford Ice Rink in the NIHL Moralee Division. Tigers had gone top of the league on Sunday after a hard fought 4-3 victory over Hull Pirates was coupled with a surprise loss for Sheffield Steeldogs at Whitley Warriors.

Tigers took the opportunity to rest a number of players with Scott McKenzie, Jonathan Weaver and Warren Tait not icing. Coach Tom Watkins iced a number of Tigers 2 players and also gave a first team debut to Rhys Howells from the U18s.

Tigers opened the scoring in the 2nd minute when Adam Taylor led a 2 on 1 breakaway and passed to Adam Jones who slid the puck into the bottom right hand corner of the goal. In the 4th minute, Josh Hustwicks’ shot was saved by Dominic Jolly in the Dragons’ goal but Howells was on hand to score with the rebound. Tigers added a 3rd goal in the 9th minute, Jason Silverthorn scoring with a low shot after being sent clear by Ricky Plant. Tigers scored a 4th goal in the 11th minute, Dan Mitchell’s shot was tipped into the net by Jed Moreland to give Tigers a 4 goal advantage at the end of the 1st period.

In the 22nd minute, Adam Taylor scored a 5th goal with a tap in from Moreland’s pass. Dragons then changed their net minder with Graeme Bird replacing Jolly.

In the 33rd minute, Silverthorn scored his 2nd goal of the night after Plant’s pass left him with a tap in into an empty net. Mitchell then scored Tigers’ 7th goal, tipping in Filip Supa’s shot from close range. The period ended with Corey Goodison scoring late on with a shot from the blue line that deceived Bird, to give the Tigers an 8 goal lead at the end of the 2nd period.

The third period was only 35 seconds old when Moreland added his 2nd of the night to increase the lead to 9. Jordan Stokes then collected his own rebound to score the 10th. 18 seconds later, Moreland completed his first ever senior hat trick with a shot from close range. Further goals were scored from Dale White and Brodie Jesson to give Tigers a 13 goal lead. Tigers 14th goal was scored on the power play by Supa who back handed the puck into the net from a tight angle.

Tigers’ net minder Jonah Armstrong was denied a shut out with just 3 seconds left of the game, when Chris Jones scored from his own rebound to get Dragons on the scoresheet.

Tigers’ victory sends them 2 points clear at the top of the league.

Man of the match – Jed Moreland.