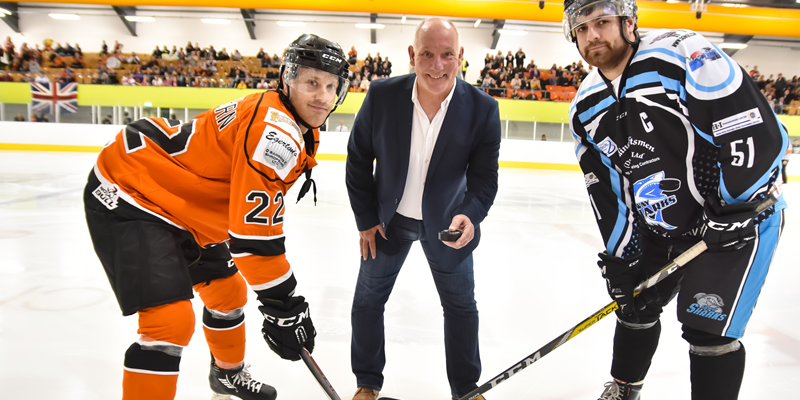 A few weeks ago we caught up with a Tigers hero, a player who has represented both the Telford Tigers and the Solihull Barons, Mark Budz.

He grew up in Saskatoon in Canada and says he remembers his father taking him to the ice rink at the age of four. And when he started at the school across the road at the age of six, he began playing ice hockey.

It wasn’t the only sport he played and he remembers “I played many a sport, growing up there, lacrosse, baseball, Canadian football, soccer, but the sport of hockey was the national game and I know my dad was very instrumental in helping me with it, so it was a case of first love.”

He played in the Saskatchewan junior leagues and then the western hockey league and the Canadian university league.

Mark got on well with the family of the two-time Stanley Cup winner Brian Skrudland and one day, after finishing university in 1983, he got talking to Brian’s brother, Barry, about playing abroad.

Barry had been in Australia, but came back convinced the Australians were a long way behind the rest of the ice hockey world. Instead, he and another man, Chuck Taylor, were looking to bring players over to the UK to play for the Solihull Barons. Mark signed up.

And then, after two productive seasons with the Barons, he made the move to Telford with Chuck Taylor.

“I was very close with Chuck” he recalls, and “I thought it was going to be a nice move, it was a brand new facility, a brand new sport to be welcomed to the area, so it was very exciting”.

Mark and his fellow players did a lot of work to promote the Telford Tigers. “We sold the game really, to the people of Telford” he says.

And it was that relationship with the community, rather than his achievements on the ice, which Mark enjoyed the most.

He spent hours teaching the sport to young players, some of whom now play for the current Tigers team, and when asked for a career highlight he chooses the games between Telford and Solihull.

“When Solihull came to town the place was absolutely hopping” he says, “we would get two and a half, sometimes three thousand people watching the game. The bar area was open and there were people watching it from there and they were three or four deep around the standing area of the rink. The atmosphere was electric really.”

While in Telford, Mark discovered a passion for golf and after his ice hockey career, He became a golf professional and for a few years went to live in Austria, but eventually he decided to move back to the UK.

“Sometimes the language barrier became a bit of a bind so we came back and moved back into Sutton Coldfield” he explains.

When he returned he said he fell into the printing business and has been doing that for the last 25 years, bringing up two sons who have inherited his love of sport.

Mark has always been keen to see the development of young British players and says he was really impressed by the “skating ability and puck handling of the younger British players” while attending the Tigers match against the Solway Sharks.

He sees players picking up the sport at a much younger age now, learning to skate at four or five.

“When we first came over kids first took up the sport of ice hockey at 13 and 14”, he remembers.

So, what is his advice for the next generation of players?