So, you’re thinking of playing one of the most exhilarating, fast paced sports on the plant? Well, you’re in the right place!

Whether you’re thinking of taking up ice hockey as a new hobby or you’re a parent of a child who would like to join in on the icy action, we have everything you need to know about playing the sport!

Lets start with the basics… Hockey is a straight forward sport however, it’s worth getting familiar with the basics of the game before you get your skates on.

Like most sports, the objective of the game is to score more goals than the opposing team. Goals will then be recorded and displayed on a scoreboard, just like you would see in football.

Each team is aloud 6 players on the ice at one given time during the game, this includes the goalie (otherwise known as the netminder).

A team consists of anything up to 22 players (20 skaters and two netminders).The are then 6 different positions which can be played, each with their own responsibilities.

The ice pad is typically ‘split’ into three sections.

The defensive zone is where your goalie will be minding your team’s net, this is the opposition team’s offensive zone.

The neutral zone is where the game will start with a faceoff in the middle of the centre circle.

The direction of attack is towards the net in the offensive zone, which is the net you want to score goals in.

There are two standard sizes for hockey rinks: one used primarily in North America, the other used in the rest of the world.

Penalties are how players get in trouble by using their sticks and bodies. If a player is given a penalty, they are punished by serving time in the penalty box.

Penalties vary in severity, with minor penalties seeing players serve two minutes in the box. Major penalties and misconducts are for more serious offences and can be anything from 5 minutes, 10 minutes or even a full match.

Whilst a penalty is being served, the opposing team receives a man advantage on the ice called a ‘power play’. A power play lasts for the duration of the penalty. In the case of minor penalties, the power play will end early if the team with the man advantage scores a goal.

Penalties can be given for a variety of reasons. These are the penalties which you should avoid….

It is very important that you are wearing the correct equipment whilst playing ice hockey. Wearing equipment which correctly fits will not only protect you, but it is a lot more comfortable and will allow you to perform to your best ability.

Thanks to our partners TRUE Hockey© we can show you all the correct equipment you’ll need to start playing ice hockey!

If you’re thinking of becoming a netminder, you will need to get a few extra items such as a chest protector, blocker and a catching glove. 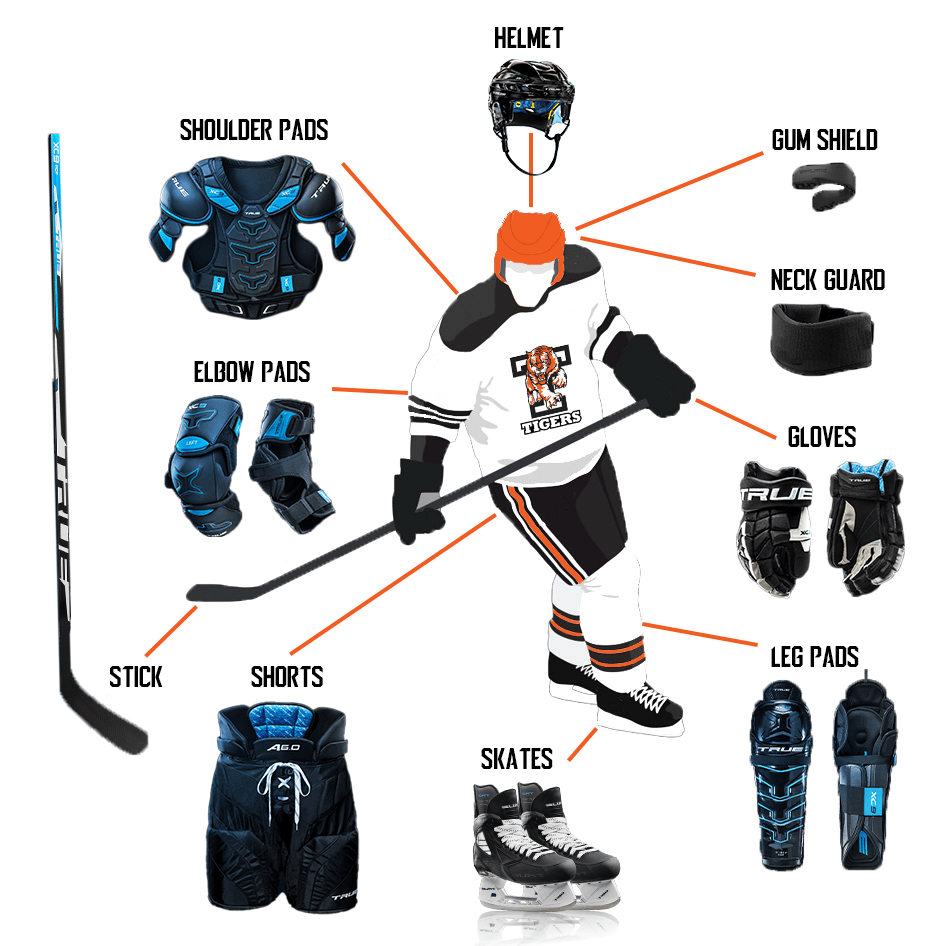 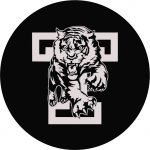 Ice Hockey is played with a Puck, the puck is made of vulcanized rubber (or another approved material), and is one inch thick (2.54cm), and spans three inches (7.62cm) in diameter. The weight of the puck can range from 5.5 ounces (156g) to six ounces (170g). Pucks that are not in gameplay are kept frozen at the penalty bench, under supervision of an off-ice official.

When the whistle blows, then it is usually for the violation of these two main rules: Off-side and Icing. Violations of these rules do not mean time in the penalty box and the puck is simply dropped for a face-off.

If you are skating towards the goal at which you are shooting and cross the blue line closest to that goal before the puck crosses that line, then you will be called for off-side once you touch the puck.

Why this is a rule:

The off-side rule encourages action by stopping a player from “camping” in front of the net.

The play stops immediately upon the linesman’s whistle and the teams have a face-off in the neutral zone (at the face-off dot closest to the offending team’s attacking zone).

If you shoot or pass the puck from behind the centre line, and the puck passes untouched over the goal line and is then touched by a member of the other team, icing is called (unless your team is shorthanded).

Why this is a rule:

This rule prevents a team from stalling by constantly shooting the puck the length of the ice.

Play is stopped and the puck is returned to the other end of the ice for a face-off in the offending team’s zone.

Time for a game

In the English professional and semi-professional leagues, games consist of three twenty-minute periods. If a match is tied at the end of regulation time, then the teams play an overtime period of no longer than five minutes, with just four ‘out’ skaters. If a team scores during the overtime period, the game is over and the scoring team is the winner. If no goal is scored in overtime during the regular season, then it is down to a penalty shootout follows to decide the winner.

Intermissions between periods last twelve and fifteen minutes.
Each team is permitted one thirty-second timeout during the game. 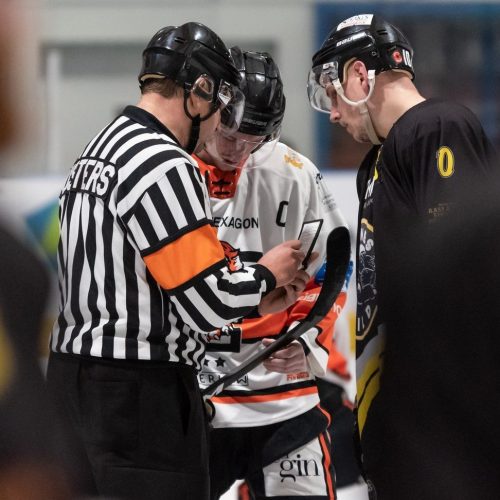 There can be up to four officials on the ice – two linesmen and two referees, supervise each game.  Each game also has four off-ice officials: the game timekeeper, official scorer and two-goal judges.

The referees have overall supervision of the game and control over all the other officials. In the case of disputes, the referee’s judgment is final. The referee also calls the penalties and determines the goal-scorer of each goal scored. In addition, the referee drops the puck for face-offs at the start of the period and then after a goal.

The linesman is generally responsible for calling infractions of the rules, such as icing, offsides, too many men on the ice, and even handling the puck with the hands. The linesman will also drop the puck for face-offs, except for after a goal and the start of each period.

Get to grips with the Terminology

Download our A-Z guide to ice hockey terms so you can talk the talk as well as skate the skate!

What do all the Statistics Mean?

GP: Games played – Number of games the team has played

W: Wins – Games the team has won in regulation.

L: Losses – Games the team has lost in regulation.

OTL: Overtime losses – Games the team has lost in overtime

SOL: Shootout losses – Games the team has lost in a shootout

GF: Goals for – Number of goals the team has scored

GA: Goals against – Number of goals scored against the team

GP: Games played – Number of games the player has set foot on the ice in the current season.

G: Goals – Total number of goals the player has scored in the current season.

A: Assists – Number of goals the player has assisted in the current season.

P or PTS: Points – Scoring points, calculated as the sum of G and A.

S: Shots on Goal – Total number of shots taken on the net in the current season.

PN: Penalties – Number of penalties the player has been assessed.

PIM: Penalties in minutes – Number of penalty minutes the player has been assessed. For statistical purposes, ten minutes are recorded for a game misconduct, gross misconduct, or match penalty.

PPG: Power play goals – Number of goals the player has scored while his team was on the power play.

PPA: Power play assists – Number of goals the player has assisted in while his team was on the power play.

SHG: Shorthanded goals – Number of goals the player has scored while his team was shorthanded.

SHA: Shorthanded assists – Number of goals the player has assisted in while his team was shorthanded.

TOI (or TOT): Time on ice – Total time on ice in the current season.

ATOI: Average time on ice – The average amount of time the player spent on the ice in the games he played (total time on ice divided by games played).

GP, G, A: Same as player statistics. Note: +/- is not recorded for Netminder.

GS: Games started – The number of games the Netminder has started the current season.

MIN: Total number of minutes the Netminder has been on the ice the current season.

GA: Goals against – Number of goals scored against the Netminder the current season.

W: Wins – Games the Netminder has won the current season.

L: Losses – Games the Netminder has lost (A goaltender is credited with a win or loss when he is either on the ice when – or was pulled for an extra forward immediately before – the game-winning goal was scored).

SOG: Total number of shots on goal the Netminder has faced in the current season.

SV: Saves – Number of shots on goal the Netminder has saved in the current season.

SVP, SV%, or PCT: Save percentage – Percentage of the total shots faced the Netminder has saved.

SO: Shutouts – Number of games where the Netminder had no goals against him and was the only Netminder from his team to play in the game.

ENG: Empty net goals – Number of goals scored while the Netminder was off the ice for an extra forward.