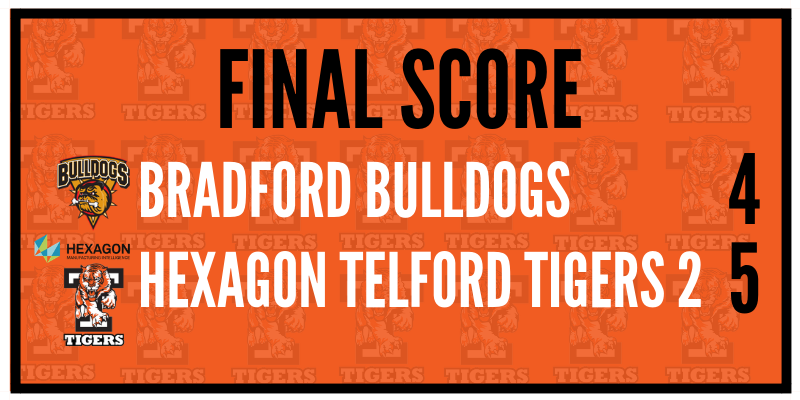 Hexagon Telford Tigers 2 bite back the win!. On Saturday 10th November the Tigers travelled to a freezing cold Bradford rink to take on the Bulldogs for the second time. After last week’s awful third period and subsequent loss to Deeside the Tigers were looking to drastically improve things this week.  This was going to be a tough ask with so many players missing.

The first period was a continuation of the poor form show atthe Deeside game, the Tigers couldn’t break out of their own zone, the Dogs dominated the game and the period ended with the Tigers 3 goals down.  During the period break the lads took a hard look at themselves and shook off their bus legs, when the puck dropped for the second period a different Tigers team hit the ice.

When the puck dropped at the start of the third the Bulldogs were determined to win, they pushed and shoved our caged players trying to get a reaction, but the Tigers held fast and dug in deep, they took no unnecessary penalties, blocked shots, put in good clean hits and played hard.  The lads showed a real strength of character not only to claw back the lead but also to hold on to it, even when the dogs emptied their net in favour of 6 skaters in the last minutes of a heart stopping game.

The lads deserved their “Sweet Caroline” in the changing room and the travelling fans had the pleasure of watching not only a good game of end to end hockey, but also one of the best periods the team has had all season.

“I was really pleased with the character and belief shown by everyone in the 2nd and 3rd period after going down by three goals in the first. It’s a huge win for us on the road as Bradford isn’t the easiest of places to go and pick up two points. To come out in the first period the way we did was unacceptable, as defensively we were disjointed, and we couldn’t find any fluidity in our play. But credit where credit is due, the players really dug deep and stepped up. They kept positive and executed what was asked of them tactically and it worked, we now have to take this momentum into this weekend against Coventry”