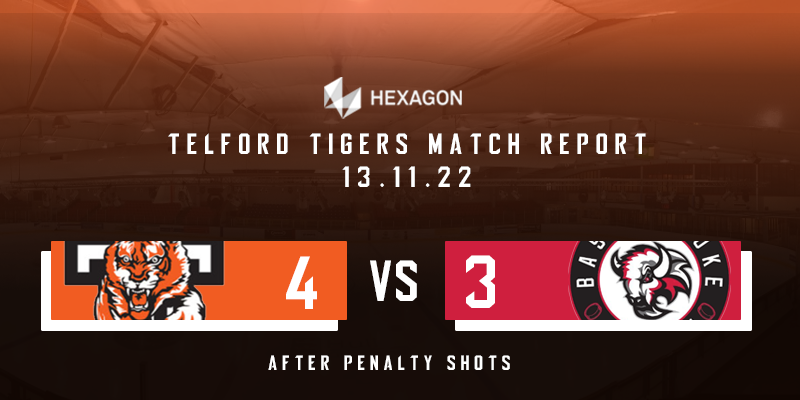 Silverthorn sends Tigers to shoot-out victory. Hexagon Telford Tigers returned to home ice after a defeat on the road in Milton Keynes the previous day. Tigers had almost returned to full strength with only Jonathan Weaver and Deakan Fielder unavailable.

Tigers had the better of a very fast paced period but it would be Basingstoke that would open the scoring with their first attack of any real note. Aidan Doughty shooting low past Brad Day to open the scoring.

Scott McKenzie went close with a break away chance that Jordan Lawday, in the Basingstoke goal, did well to block. Tigers did not have to wait for a goal for long though. With the line of McKenzie, Ricky Plant and Jason Silverthorn dominating much of the possession, it was not a surprise that all three would have a hand in the equaliser. Plant made a superb pass to McKenzie in space in the slot, McKenzie then sent the puck in on goal where Silverthorn deflected the puck past Lawday.

Tigers fell behind again early in the second period. A turnover in the Telford defensive zone allowed Basingstoke to recycle the puck to Thomas Banner whose shot at goal was saved but Marcel Balaz was on hand to turn the rebound into the goal.

Basingstoke’s Marcus Mitchell then struck a shot from distance that hit the post.

With five minutes of the second period left, Bison scored again. Tigers’ Fin Howells had been called for boarding but before the penalty could be given, Doughty sent a long pass to Edgars Landsbergs who broke in on goal and shot past Day to give Bison a two goal lead.

Tigers started the third period well and were pushing hard to get back into the contest and pulled a goal back with ten minutes of the period left. Scott McKenzie won the puck in a battle behind the Basingstoke net and then banked the puck off Lawday and into the net.

Tigers then had a great chance to equalise when Oliver Hemmings-Maher was called for holding giving Telford a vital power play chance. With the power play unit working well, Plant sent a pass from behind the goal and Rhodes Mitchell-King hit a first time shot from the right circle into the top left hand corner of Lawday’s goal to level the scores.

With no further goals, the game went to overtime where both teams cancelled each other out, sending the game to a shoot out.

Basingstoke went first in the shoot out and Brad Day was in superb form saving the first three Basingstoke penalties. Vladimir Luka and McKenzie scored for Tigers before Howells missed and Doughty scored for Basingstoke. This left Silverthorn the opportunity to win the game and the Tigers’ captain made no mistake with a clinical finish past Lawday to seal the victory for Telford.

After the game Head Coach Tom Watkins, commented, “We got there in the end. We kept on knocking on the door through the second and third period and got rewarded for our spirit and determination with a penalty shot win. It was an exciting game for the fans and a good character night by the team.”