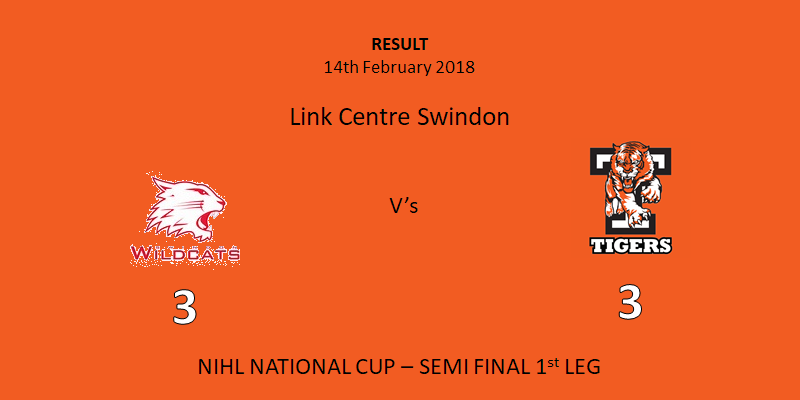 Telford Tigers 1 took a midweek road trip to play Swindon Wildcats in the first leg of the NIHL National Cup semi final. Tigers had beaten Streatham in the quarter finals to qualify to face off against their former EPL rivals and were looking to record their first victory at the Link Centre having lost all 3 previous visits there this season.

Swindon struck first in the 19th minute with player coach Aaron Nell scoring to give the Wildcats the lead at the end of the first period.

Tigers equalised in the 26th minute when Nick Oliver scored his first Tigers’ goal after neat passing from Jason Silverthorn and Jonathan Weaver. Tigers ended the period under pressure but net minder Dennis Bell stood firm and ensured that the score would be level at 1-1.

In third period Tigers took the lead in the 45th minute when Dale White scored after good work from Silverthorn and Ricky Plant, but Swindon responded less than a minute later, with Nell scoring his second goal of the night to tie the game at 2-2.  Bell then made two terrific saves to keep the game level.

Tigers scored their third goal in the 56th minute with Filip Supa scoring from Scott McKenzie’s pass to give Tigers the lead. In the final two minutes, a boarding penalty was called against Jordan Stokes which would prove crucial. Swindon took full advantage of the power play with Sam Bullas tipping Nell’s shot past Bell with just 18 seconds of the game left, to leave the tie finely balanced ahead of the second leg in Telford next week.

Man of the match- Dennis Bell.

After the game coach Tom Watkins said, “I thought the guys battled hard tonight. We put some makeshift lines together with the addition of Joe Aston to the roster and Louis Morgan playing as forward. We started slowly and I think we grew in confidence as the game went on and I was pleased with our character coming from a goal behind to take a 2-1 lead.”  Watkins added, “Filip scored a great individual goal which gave us the lead but I was disappointed we didn’t block the shot that lead to the tying goal. I think we would have settled for a draw before the game and it sets up the second leg nicely for a big game in Telford next Tuesday. “

The second leg will take place on Tuesday 20th February 2018 at Telford Ice Rink with face off at 7:35pm. Ticket information is available here