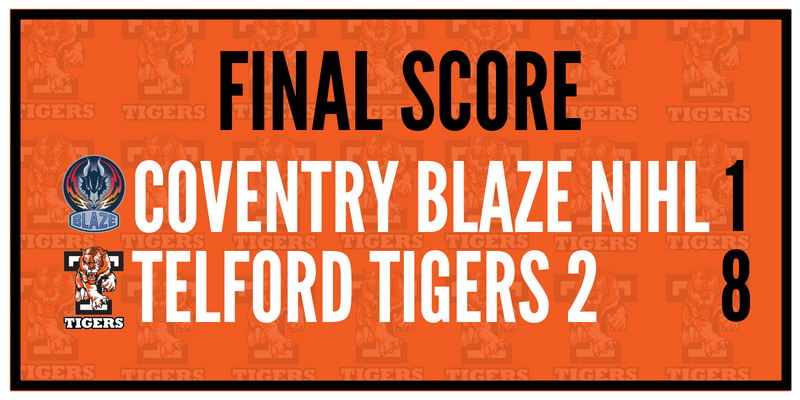 With the start of the 2018/19 season just around the corner, there’s just enough time to squeeze in a couple of challenge games to get things going!

On Saturday, Telford Tigers 2 had the pleasure of not only sporting the new 2018/19 away kit produced by Fiveon3, but also being Coventry Blaze NIHL’s first guests of the new hockey season. Despite having very little training time together this season, Tigers 2 pulled it off with a comfortable 8 goals to 1 win.

The puck dropped for the first period and it was clear to see that it was first game which both teams had stepped onto the ice for. After a few minutes, the pace began to pick up and within the first half of the first period, Karol Jets bagged the guests a powerplay goal. Coventry didn’t take long to respond with a powerplay goal for themselves shortly after timed at 13:55. The first period ended in favour of the Tigers, 2 goals to 1.

It was the second period where Tigers stepped it up a gear, with another three goals from Callum Griffin and Callum Bowley. Tigers were make the most of the powerplay opportunities, many of them coming from a new league rule being implemented – ‘late hit’. At the half way point of the game, Tigers 2 player coach Callum Bowley made the decision to take Zack Brown out of the nets and give Oli Johnson some ice time!

As both teams went into the third period, Blaze were still chasing Tigers for a second goal. The hosts struggled to keep up with the quality play of the game as Tigers managed to bury the puck for another three goals from Jets, Bowley and Hammerton.

The final buzzer sounded, and it was Tigers 2 who came out on top with an easy-going 8 goals to 1 win.

Tigers 2 player coach Callum Bowley was pleased to take home the win and had the following to say;

“I was quite pleased with the performance and tempo from my lads last night. The first 10 minutes of the game we came out slow which I expected given we only had one hour on the ice as a team prior to the game.

After settling in, we did a really good job in controlling the game, forcing turnovers in good areas of ice, not giving Blaze too many quality scoring opportunities and were clinical on our power play and penalty kill.

It’s a great start, but it’s only one game! We’re not at the fitness levels I think we should be at and that’s purely down to the lack of ice time we’ve had as a group pre-season. We have a lot of areas to work on if we want to have a good season, so we’ll prepare in our training this week, ready to go again for next weekend and step it up a notch.”

Telford Tigers 2 will be hosts to Coventry Blaze NIHL this Sunday at 6:00pm in the final leg of the pre-season Challenge series.