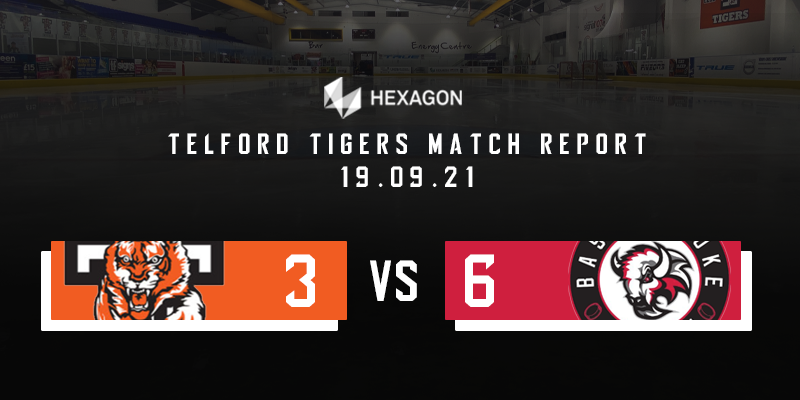 Tigers Fail To Stop Bison Stampede. Hexagon Telford Tigers played their first game at home in the Autumn Cup against Basingstoke Bison at Telford Ice Rink. After a hard-fought 2-1 victory over Swindon Wildcats in Wiltshire the previous evening the team returned to home ice.

Basingstoke started the first period the stronger and penned Tigers in their defensive zone for much of the first 10 minutes of the game. Tigers were indebted to Brad Day for keeping the scores level, with the Tigers’ netminder making two sharp saves to keep out the Basingstoke forwards. Austin Mitchell-King had a glorious chance to give Tigers the lead but shot well wide with a breakaway chance.

The final three minutes of the period proved disastrous for Tigers.   First, Alex Sampford fired home a rebound from a shot that Day spilt to give Basingstoke a deserved lead.  Things got worse in the final minute of the period when an awful bounce of the puck went against Tigers, gifting possession to Adam Harding who passed across the ice to Sampford to fire home his second of the game and send Tigers into the break with much work to do.

Tigers looked lacklustre during the start of the second period and just couldn’t get their game going. Basingstoke always looked dangerous on the break and had pressure on Day’s goal. Sampford almost completed a hat trick when his rising wrist shot struck the post. Tigers’ task got even harder late in the period when Basingstoke scored the third goal. Alex Roberts beating a tired-looking defence to the puck and shot low past Day. A late Tigers’ 5-on-3 power play produced nothing of note, leaving Tigers with a mountain to climb in the third period.

Jason Silverthorn got Tigers on the scoresheet in the opening minute of the third period with a goal forced in from close range after good work from Mitchell-King. But, Tigers would soon find themselves a further two goals behind. Poor defending cost them dear as the team failed to clear the puck from their defensive zone allowing Aidan Doughty to fire home past Day to increase Bison’s lead and shortly after Adam Jones scored a power-play goal to put Bison 5-1 ahead. With the game slipping away, Tigers rallied in the last 5 minutes and fought back with two quick goals. Mitchell-King backhanded the puck into the net after good battling by Scott McKenzie created a chance. Silverthorn added his second of the game from close range after Andy McKinney had forced the puck on the net. Despite the two goals, Tigers could not force any further chances and pulled Day from the net for the final minute, allowing Harding to score with an empty-net goal to seal the win for Basingstoke.

Man of the match. Jason Silverthorn.

After the game Head Coach, Tom Watkins, commented, “It was a pleasure to be back playing at home and great to see so many fans and friends in the rink. We felt the pace during the game and made some tired plays and it was evident where Leeds are as a team in terms of fitness and game time as they are a few weeks ahead of us.
The team worked hard and stuck at it and as with the game in Sheffield on Saturday, I felt the third period was our

After the game, Tigers’ Head Coach Tom Watkins, commented, “After the positive performance against Swindon, the game tonight was the polar opposite. We lacked energy and any physical play. Our forwards passed up hits and were swinging sticks instead of making contact and finishing their checks. We made poor decisions on the puck, had no composure and as a team we were slow to get going. It wasn’t really until the second period that we established ourselves and when I felt like we got some momentum but we took far too many penalties.

It all sounds very negative but we did create chances and dominated the play at times but I felt we were inconsistent as a group and Basingstoke fully deserved the win. It’s still very early days in the season.”